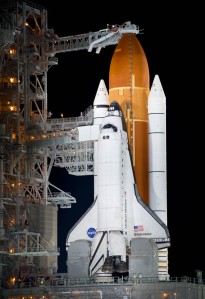 Behind closed eyes, fate is left at the shaking hands of our imaginations. Places new and amazing remain unseen. The feel of hearts racing in the anticipation of a dream.

I write what would be classified as “Soft Science Fiction.”  You will not find anyone yelling “Captain! The reactor’s about to blow! We must do something or the galaxy is doomed!”

Yet, still, it is Sci-Fi, andtherefore based on an extrapolation of real science.

Today, we’re standing at the edge of “the next thing”, but we’re so close to it, we can’t see it. The space shuttle Endeavor is sitting on the launchpad, ready to fly mission STS-134. It will be the last flight of the fleet, ever. NASA astronauts Mark Kelly, commander; Gregory H. Johnson, pilot; Michael Fincke, Andrew Feustel, Greg Chamitoff and European Space Agency astronaut Roberto Vittori, all mission specialists, are waiting to fly one last time before the shuttles go to their final resting places in New York, Virginia, Florida, and the California Science Center in Los Angeles where Endeavor herself will retire. The shuttle was supposed to launch Friday, the same day Prince William married Kate Middleton, but it has been delayed several times and we are currently waiting to hear just when this epic launch will actually take place.

So, what happens next? Can we get a sneak peek at the next page? Because, career-wise, this is really important to me! How can I write about humanity hanging a left when it turns out that, in my own lifetime, we really took a right? I need to know!

One answer is NASA’s Constellation Program. There are also all kinds of private endeavors reaching through the atmosphere, supposedly making space more accessible to the common man. I have mixed feelings about this… I want my own government to keep moving out into space, not give up! But although the shuttles are done (They did live much longer than intended, though their successors never made an appearance,) I don’t think the U.S. is “giving up”. Whatever one’s personal feelings towards the current administration in all three branches of government, we’re not grounded. But with the uncertainty of placing the reins in the hands of so many private companies, each with their own goals and agendas, it’s difficult for us as a people to get behind any particular one. Some of us want to cheer. We need to cheer. We need to feel that, even though we are writers and bankers and massage therapists, that we are some small part of this shared reach out into space.

Could someone please extrapolate our science just a bit more for me? Please? Because I see great things beyond the next horizon, but I just can’t figure out how we get there.

I want to know.

A writer by birth, a redhead by choice.
View all posts by AmyBeth Inverness →
This entry was posted in Real Science, Writing. Bookmark the permalink.