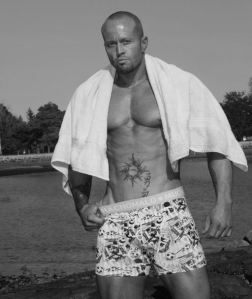 A gratuitous picture of John Quinlan, because not only is he adorable, but I'm too tired to find an image that somehow fits these rambles.

I do love to have the internet handy while I write. Yes, it can be a huge distraction, especially when I OCD on checking twitter, G+, and facebook for comments on something I posted.

I know for a fact that I write much faster when I turn of the TV and internet. But I’m not necessarily more productive. For example, chapter one of Synaesthesia was published with the word thingies substituted for a term I couldn’t think of on the fly.

In the beginning of a story, I often find myself visiting babynames.com advanced search to find names for characters. I don’t want weird names, but I like to find names that are distinctive enough that the reader quickly identifies the name with the character I created. I don’t like changing a character’s name halfway through a story.

Today, while writing chapters five and six of Synaesthesia I realized I wanted to say something about how the researchers discovered that parts of Kennealy’s brain that were normally dormant in humans were very active following a jaunte. But I don’t like using bad science, and I wanted in particular to know if science has identified what exactly those parts are. On the left? The right? Off the top?

So I had a race with twitter, Google Plus, and facebook. I asked “A medical/scientific question: We know we only use 10% of our brain. Does science know what physical part of our brain is “just sitting there”? Here’s what I got on each:

Jennifer R. Povey – That’s actually a myth, to my knowledge.

Glenn Rogers – I think I’m sitting on it now…

Greg Christopher – Its a common myth. At any given time, you only use 10% of your brain perhaps. But that is because of multiple redundancies.

Your computer doesn’t use all of your RAM at any given second either.

AmyBeth Inverness – What Jennifer said… I’m googling now and getting mostly “That’s a myth…” results, which is sad for a science fiction writer. Maybe I’ll pretend it’s not a myth and go on this this story line as is…

Steve Youngs – As far as I know we don’t yet have a way to measure a brain’s capacity. No one has ever filled their brain to the point where they could not store another piece of data. Could you imagine it? You’re reading something and right in the middle of a juicy part of the story your vision goes black, a warning chimes, and words appear on your forehead: Insufficient Space to continue. Head Full

But how much of your brain gets used? 100%. Just not all at the same time (there is no such thing as true multi-tasking).

Facebook, of course, began snarky (And I do appreciate good snark!) but then a few people chimed in with useful answers.

Dede: I think it depends on your political party affiliation.

Larry: I think it depends on if you’re a politician!!

Gawain: The “10% theory” is something that I used to study. From my understanding, there are words missing from the “10% theory” when most people discuss it.

Those words are “at a time” – meaning that, according to this theory, we only use 10% of our brain at any given time.

It is difficult to indicate which part of our brains are “just sitting there”, because new synaptic pathways are continuously being used, forged, or reforged.

When we break, or otherwise incapacitate a limb, for example, it has been shown that other pathways become used for the counter-limb to “take over”.

AmyBeth: I remember one of the Steampunk-ish superhero movies had the antagonist (I think) lobotomized towards the end. He used to be telekinetic, but since they removed that part of his brain that he used for telekinesis (part of that 90% the rest of us don’t use) he lost the ability.

It’s a great sub plot for sci-fi writers… but I guess I’m going to have to go another way lol!

Gawain: Not exactly, AmyBeth – consider this:

It is quite feasible that there is a part of the brain that is generally “dark” that, when hyper-stimulated could result in some outrageous psi abilities.

“Real Science” would indicate that even a “dark part of the brain” can receive some limited activity based upon the stimuli presented. (Hence why some people can have a hyper-kinetic reaction to extreme stress in the form of preternatural doses of adrenaline, while other don’t)

Tyler: Mythbusters covered the “10%” myth. We use more like 30% of our brain. When we use one part of our brain at a time then it is 10% But we more use 30% at any given point because we are using multiple parts at a time.

Gawain: Tyler – well, I knew that it wasn’t actually “10%” – but don’t the current assessment of brain use. Thank you for adding that bit of information.

The rest of my assertion remains, I believe, as fairly factual.

AmyBeth: A major theme in the story I’m writing (Synaesthesia) is that humans have more than just 5 senses, we just don’t know how to use them. When scientists are looking to be able to travel in time, they stumble upon these other inputs, and it causes an avalanche of unanswered questions.

It would be convenient from a writer’s POV to be able to say “And that part of his brain we don’t normally use was suddenly lit up, according to the sensors…”

Gawain: ‎…and you can actually use that, AmyBeth.

There are still parts of the brain that are “dark” or under-stimulated. If those parts were to be suddenly become hyperactive, who *knows* what would be wrought!?

Again, this is why some people seem to exhibit certain characteristics (Eiditic Memory, anyone?), while others can’t seem to quite gather the skill.

Gawain: Glad to be of service. 🙂

This is one of those times when I needed to look something up, and it really did change the direction the story took. I’m pausing for the night in the middle of chapter 6, mostly because it’s late and I’m tired, but also because I want to let this stew a little before I go on.