Let’s Give ’em Somthing to Blog About

Posted on November 16, 2011 by AmyBeth Inverness 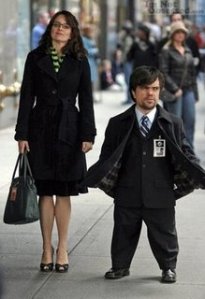 ROW80 Update: I’m barely chasing that diagonal line on the NaNoWriMo statistics page. I’m at 23,000 words, and I wanted to be at 30,000 by now. But I’m finally back home in Vermont after spending two unexpected weeks in North Carolina while my father recovers from Double Bypass Surgery. He’s doing well, I’m home, and hopefully I can get back on track. Overall, the story is shaping up well; I just have to get the words out.

Last night I started watching 30 Rock when it came on after whatever else I was watching. It’s not a show I usually watch, so I was surprised when I saw Peter Dinklage on the screen! I realize now that it was an old episode (Senor Macho Solo), and I hope I can watch it again on-line. The reason I was excited to see Mr. Dinklage on the screen is because I’ve based my MMC on him. It was great seeing him play a contemporary character, as the most screen-time I’ve seen him in is HBO’s Game of Thrones, which is a medieval-ish fantasy. My novel is Science Fiction, so seeing him play a modern character was very interesting.

Hmmm… I think I’ll post an excerpt. So, yadda yadda yadda spoiler alert, but there’s probably only going to be three people who actually read this post, so…

The excerpt is rated R, but really funny. But since it’s R, it’s going Under Loch & Key.

A writer by birth, a redhead by choice.
View all posts by AmyBeth Inverness →
This entry was posted in Commentary & Musing and tagged 30 Rock, Game of Thrones, Peter Dinklage, Tina Fey. Bookmark the permalink.