SyFy Q of the Day: The Abandoned Planet

Posted on November 22, 2011 by AmyBeth Inverness 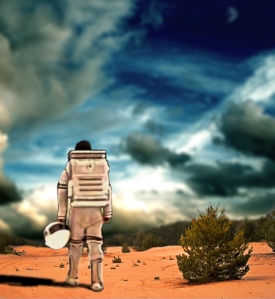 The Last Day of Terraforming by D Mitriy

Before I even started this blog, I would occasionally pose a SyFy Question of the Day to my facebook friends. Sometimes, it was directly related to what I was writing, and I really did want some input to help me decide what direction to take with the story. Other times, it was purely fun.

SyFy Question of the Day: What plausible reasons might there be for an alien race to abandon a planet, leaving behind an environment that it suitable for humans?

US_Nessie:         It is true that there are several ancient earth civilizations who deserted their cities… and we don’t know why in most cases.

Cat:                        Maybe it’s an ambush, and as soon as the humans get comfortable, mayhem and madness will occur. Or maybe they’re itinerant farmers, and after preparing the planet for this crop of humans, they’ve moved on to the next. Or maybe they simply got a raise and moved to a nicer alien neighborhood. 😀

Cat:                        @John: Suburbia–yes! That one does get my imagination going about what the planetary suburbs might be like–the word “nicer” being subjective since we don’t know their ideals…

Perry:                    I agree with Patty. The environment now which is favorable to humans, is not favorable to them. Maybe the mutation and advent of photosynthetic life on that planet generated an atmosphere too rich in oxygen for them, or how about global cooling from too little carbon dioxide in their atmosphere lead to an environment too cool for their biology.

Dave:                    No but really, it had little to do with Earth. It was do to a major enviromental condition on their own home world. Their ruler stopped all exploration in order to commit resources to improve the conditions of his people.

Gawain:               This could be the effect of the alien race abusing the planet so that it is no longer hospitable for their own kind… it is just a lucky break that the environment that is so inhospitable to them happens to be suitable for humans.

Pony:                    It’s been done. The Preservers is a concept common to a fair number of SciFi novels over the last half-century or so, especially in the STAR TREK books.

They were the ones who seeded those American Indians on that planet where Kirk became Kirok, and they had to deflect an asteroid away from hitting the planet.

US_Nessie:         Nirmimani… or was it Mirimani? And didn’t someone write about her surviving somehow and having Kirk’s baby?

Geri:                      They followed a false prophet who warned them that the world was about to end so they all packed up their space campers, painted apocalyptic messages on the sides, and booked it. ‘Course, since the prophet was false, the world failed to end and in fact continued on better than ever thanks to the exodus of the parasitic species that was willfully destroying their own environment in a nihilistic frenzy of self-satisfaction.

Shane:                  An empire expanded then collapsed. Unable to support its furthest colonies, some outlying terraforming projects are abandoned. Like the Roman Empire, or how some countries do with the conquering of lands in the present day….

Robert:                 Because other life on their planet was beginning to show signs of intelligent thought. They might move here as we will all soon be gone dew to the Democrats! We can call it CHANGE!

Post Script: I’ve wavered back and forth about the whole SciFi vs SyFy thing for a long time. Saving just one little letter in a tweet isn’t really saving much, and the Polish translation is a really strong argument against SyFy! I’m not one to make changes lightly. But I think that, at the end of this year, along with other structural changes I might make to the site, I will change SyFy Question of the Day to the name SciFi Question of the Day.

Joe will be happy.

The next SyFy Q of the Day is Flying Cars

A writer by birth, a redhead by choice.
View all posts by AmyBeth Inverness →
This entry was posted in SyFy Question of the Day. Bookmark the permalink.

1 Response to SyFy Q of the Day: The Abandoned Planet