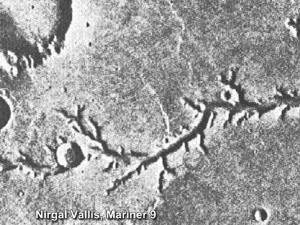 SciFi Question of the Day: Charles Root Jr suggest that, when we colonize Mars, we enclose Nirgal Vallis and live there. So, how do we make this work?

AmyBeth Fredricksen  Would we have to enclose it completely? Air tight? Or if we’re hoping to terraform, can we get most of the air to stay down in the canyon?

Dave Mac  Your first few concerns are air, food warmth and protection from radiation. Science (fiction) could invent a huge inflatable cover (dome) made from a material that collects heat and acts as a sheild from radiation. Mar’s Oxidized red soil could be evidence that like the moon, oxygen is contained in the soil which will be released by the heat build-up and the interduction of plant life. As far as kickstarting the planet (terraforming) you could consider large amounts of nuclear waste being dumped hundeds of miles below the surface to create a magnetic field, this will protect the planet from the solar wind and help create ozone layers to hold in heat and atmosphere.

Dave Mac  Or just land a good pizza joint with a good band and the rest will work itself out by itself.

Charles Root Jr  As much as I’d like to take full and complete credit for such a cool idea, I cannot. This particular method of Mars colonization was proposed by Kim Stanley Robinson in the most fantastic trilogy Red Mars, Green Mars, Blue Mars. It would be an interim step in the colonization and terraforming of Mars. More info on the book series here:

Dave Mac Must be filled with a lot of technical manuals.

Dave Mac I bet James Doohan had to put up with a lot of that over the years.

michael interbartolo  are we terraforming? I would say we build apartments into the sidewalls looking the area

AmyBeth Inverness  Do we carve out rooms like caves? Or do we build against the walls, drilling into the sidewalls for support?

michael interbartolo  I say a whole cave system with some glass windows every so often for light.

Laston Kirkland  both… using what we carve to build with…

so first we need a self replicating santa clause machine… (we are surprisingly close, actually) we send one up there and check on it and its copies once in a while… and move in when they are done.

Christopher Clark   you guys figure all that out, im going to figure out how much stronger my booze is going to be, attempting to distill at Mars Gravity sounds like its going to have a hell of alot more issues, because i can live under a rock as long as i can have a drink every now and agian

Laston Kirkland  me personally I say we skip the planets, and start building some O’neill colonies…

AmyBeth Inverness  Christopher- Maybe that will be the next SciFi Question of the Day lol!

Mz Maau  I would think terraforming would be required with most planets we colonize. Though, not sure if you could ever replicate the required atmosphere on Mars, so perhaps a bunch of cave-domes would be best.

Laston Kirkland  why live in a cave in a gravity well….when you could live here, faster, with less work? Rama – HQ version

The previous SciFi Q of the Day is Women Doctors

A writer by birth, a redhead by choice.
View all posts by AmyBeth Inverness →
This entry was posted in SciFi Q of the Day and tagged Mars, Terraforming. Bookmark the permalink.

2 Responses to SciFi Q of the Day: Nirgal Vallis