Transgender Day of Remembrance, a guest post by Jane Kindred

Posted on November 19, 2012 by AmyBeth Inverness

Tuesday, November 20, marks the 14th annual International Transgender Day of Remembrance, in which the beautiful lives lost each year to trans-hatred are remembered and honored as part of Transgender Awareness Week. AmyBeth asked if I might like to write a guest post about the topic, since I have a novella that touches on this tragedy.

On October 3, 2002, Gwen Araujo, a 17-year-old trans teenager, was viciously beaten and strangled to death by four men so threatened by their attraction to her they thought it was their right to destroy her. During a series of trials that included the “trans-panic” defense, many people made or condoned this assertion, including the prosecuting attorney who could not seem to call Gwen “she,” and who blamed her for inciting the violence against her, stating, “I don’t think most jurors are going to think it’s OK to engage someone in sexual activity knowing they assume you have one sexual anatomy when you don’t.”

The assumption that for most people, it’s perfectly understandable to react with violence if you feel “deceived” by a sexual partner’s gender representation troubles me. It suggests that there’s a class of people whose very existence makes us uncomfortable. And it presumes that heteronormative male desire is so important and fragile that to cause a man to question the nature of his desire is in itself some kind of unforgivable assault.

Gwen was a girl just becoming a woman, not a boy or a man pretending to be one. She acted on her burgeoning sexual attraction as a woman, and her desire to be desired. Being seen as who she saw herself to be by the men she attracted must have made her feel incredibly validated. Her punishment for that was an “understandable” brutal killing.

No, it wasn’t understandable. It was unspeakable.

My reaction to that statement and to Gwen’s senseless death was to do what I do about everything: I wrote. Out of that ugly reality, I created a beautiful 17-year-old sacred courtesan who looked like Gwen and I gave her the chance to take her life back from those who tried to take it from her. That story became my first published novella, The Devil’s Garden.

Gwen is just one of many names on a list that is too long, but hers is the story that caught my attention when her murderers’ first trial ended in a mistrial here in the San Francisco Bay Area. It was my hope that giving Gwen life in fantasy might help people to understand something about their own thinking and change it.

Please join me on November 20 in remembering the lives that have been taken, and check out the TDOR website for events being held in your area to bring awareness to these hate crimes.

Jane began writing romantic fantasy novellas at the age of 12 in the wayback of a Plymouth Fury—which, as far as she recalls, never killed anyone…who didn’t have it coming. Born in Billings, Montana, she was soon whisked away to Tucson, Arizona where she spent most of her childhood ruining her eyes reading romance novels in the sun and watching Star Trek marathons in the dark. Although she was repeatedly urged to learn a marketable skill in case she couldn’t find a man to marry her, she received a B.A. in Creative Writing anyway from the University of Arizona.

She now lives in San Francisco with her son Samson, two feline overlords who are convinced she is constantly plotting their death, and a cockatiel named Imhotep who punishes her for sins in a past life (and whom she frequently imagines tastily smoked, dried, and splayed on a stick like omul fished from Lake Baikal).

Her pen name was inspired by the twin sister of Philip K. Dick who died shortly after their birth, and by whom he felt haunted until the end of his life.

She fights for my life and I for hers, eternally. I am damned always to be separated from her/and with her, in oscillation.

Having had numerous odd little moments of synchronicity in her writing and her life with things Dickian, it seemed appropriate.

Jane is represented by Sara Megibow of Nelson Literary Agency. 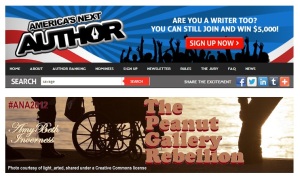 AmyBeth’s story The Peanut Gallery Rebellion is in the America’s Next Author contest. The relationship in the story is not strictly heterosexual, which is apparently freaking out some of the reviewers. Please, read the story, and if you like it, click VOTE for me. If you’re feeling especially generous, I also appreciate reviews!

2 Responses to Transgender Day of Remembrance, a guest post by Jane Kindred