Posted on March 5, 2013 by AmyBeth Inverness 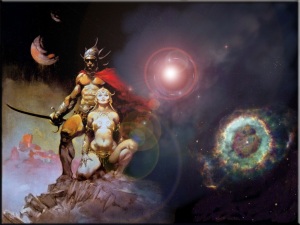 SciFi Question of the Day: If a political or corporate entity made it to Mars and established a foothold there, how much of a “land grab” should they or could they do? What happens when the next, unrelated group comes?

Perry Willis No country or company should be able to claim a planet. I would think what they could claim would be what they can develop or at worst bet to the visible horizon.

William J. Teegarden Depends on how big their guns are, and how many they’ve got!

Clint Johnson
As ever, I come at it from the perspective of trying to limit conflict.

That said, we are not trying to create a “Law of Space Treaty” that would work to that goal. The only treaties we have consist of draconian restrictions combined with a collective claim to the whole of space by the United Nations in the name of “all humanity”.

That certainly doesn’t bode well for keeping conflict to a minimum.

I think it is vital to create a liberal treaty that recognizes a zone of sovereignty around any permanently inhabited place without imposing an ideological driven socio-political systems upon them. The recognition of zones of sovereignty work to alleviate conflict while the imposition of ideology ensures it.

So start with a recognition of sovereignty that doesn’t impose ideology. This goes back to the Westphalian Peace that put forward three key principles:

1)The fundamental right of political self determination.
2)Equality before international law for the sovereign states.
3)A state can’t interfere in the internal affairs of other states.

I would also suggest a Declarative basis for the recognition of a sovereign state with the simple criteria of:
1) a defined territory
2) a permanent population
3) a government
4) a capacity to enter into relations with other states.

Now we come to defining that territory. Despite the ideological and active interference through much of the “Law of the Sea Treaty”, it does work for a starting point for discussing territorial rights when establishing sovereign states in space.

The focus is on the extension of territory and territorial influence into oceans and seas. This actually has a better fit with space stations so that:

For surface territorial limits, I would swap those so that:

1)Territory Area encompasses a 370 km radius circle
2)Exclusive Economic Zone is an additional 22 km beyond that.

Those are just transposing the numbers that were found agreeable to signatory states here on earth and is of course open to debate as to whether they should be greater or lesser. I would suggest simplifying and extending to 50km and 500km would be a good incentive and equitable… but a good argument could be made for 10km and 100km as being plenty for any colony just starting out and would make it more difficult to claim huge areas by placing a few guys in bare habitats every 1000 kilometres.

Matthew Souden
Lets assume that despite any agreements made here, that the corporation or government in question would basically cheat. They would grab more then they were meant to, they would fight others off their claimed turf etc. The deciding factor then would be a measure of their fire power up there, and there sway on the media down here. If they had high amounts of both, they could do whatever they liked.

Wil Hutton
They would claim as much territory as they could reasonably hold on to and protect. They would also not likely claim territory that was of little use to them, except to insure access to other resources.

There was a roleplaying game called Jovian Chronicles that had a good treatment of a Mars divided between two governments.

Dan Thompson
Even if it stayed peaceful, i.e. avoided the dreaded land war on Mars, there are plenty of other ways to wrest parcels of land away.  Think about the traditions of squatters rights, the homestead principle, eminent domain.  When our ray gun isn’t handy, we can always fall back on lawyers.

Zachary Besterfield
If the Martain colonist are not yet self-sufficient, and are in need of Earth-made supplies and personnel, I think that a land-grab by a government/corporation is entirely likely and reasonable.

When Martains become self sufficient, and no longer need the specialized goods from Earth, they will simply ignore Earth political structures and in turn create their own. A corporation could claim a tract of land at that point, but they couldn’t enforce their claim unless the locals allowed it.

michael interbartolo
he who occupies Barsoom, controls Barsoom.
what ever land they control, use is theirs. they don’t own the planet just cause are the first boots on the surface.

Ramsez Stamper
Not sure about mars, but i do believe there’s a law the united nations passed that prevents any nation from claiming land on the moon.

On mars it would be a mixed nationality crew…the most likely situation is that they choose to reject all earth nations to form their own.

AmyBeth Inverness
I’ve heard that about the UN and the moon… I’d really like to find some reliable reference so I get the facts right if I include it in a story.

Ezra Strong
Treaty of Outer Space 1967, Article 2. Of course, that is just an international treaty, so like most, of only binds those who sign it, and sometimes countries back out. Then there’s the whole — what can the UN do about it? Or what if it’s a corp? Or non-signatory country?
As for land grabs, depends on what they’re doing and finding. Some handy mining to be done? Get while the gettings good!

Adam Dooley
First off, any group of people in a local space could be considered a political or corporate entity. If they exist in a place where no other country or corp. has authority, they are the authority. This process will repeat until it would become to expensive to go to the next empty rock. But, as a historical comparison, I think Hawaii is a worthy study in how an independently run ‘nation’ could be annexed by another country.

Greg Barozzi
I see the Mars colony starting as a scientific research post where families come along for the ride. Four generations later, the colony firmly has it’s own cultural identity. The scarcity of resources coupled with the harsh environment breeds a much higher than Earth normal level of fascism in the Martian government. In response to economic sanctions over the execution of Martian criminals and unemployable civilians, the the colony revolts and humanity’s first inter-planetary war begins … but no land grab, not on Mars.

Roy Cheng
Mars Trilogy by Kim Stanley Robinson is an interesting perspective on this, even if it is just Sci-Fi.

Ezra Strong
Looking at it from a practical perspective, it’d depend on how hard it is to replicate, and how supply dependent they are. If they need regular supplies from Earth, you’ve got a jugular target. If they’re the only ones who know how to run the atmospheric control, you have to bargain with them.

Jacob Dix
I suppose the same international agreements concerning the moon would be precedent, though who knows!

Gra Liv
If it became an issue the lawyers and lawmakers would become involved. If something has value then they would all want a slice.

The most interesting part is the discussion of geosynchronous orbit slots, and this is current events not future speculation.

John Powell
I would imagine that some sort of homesteader’s program would be possible, provided that they could create or exploit existing incentives to leave Earth.

In regards to the second question, isn’t the answer always violence?

Doug Grayson
Personally, I think such an entity would be entitled to the land they could reasonably maintain with the force sent to claim it.  Half a dozen scientists, for example, could probably maintain a few hectares of land, while a larger exploratory group could maintain something the size of a small state.  Anything beyond that should remain unclaimed until such time as it can be explored/mapped/maintained.

Unless the company involved is Disney.  Because Disneyplanet willeventually happen.

Mercury Messenger
If humans are involved the next event would be war.

ML Duong
I think corporate ownership of landmasses is a bad idea. Governments at least have to pretend they care and serve the citizens that live on the land. Corporations on the other hand wants to extract and exploit as much profit as possible without inciting outrage. The extreme distance between Earth and Mars allows corporations away from critical eyes to get away with a lot dubious decisions.

Gustavo Campanelli
The moon can’t be owned by anyone, perhaps we need to check the status of Mars before answering this question.

ML Duong
+Gustavo Campanelli What will the UN do if China or Shell squats the moon? Nuke them?

Stephanie Chaptal
The Moon status (as the Antartica one) are valid for all solar system if I recall correctly my international law studies, years away from now.

Greg Arnold
When the next goup arrives, it will be a question of the “Have’s” and “Have Not’s”, especially if corperate greed is involved on Mars.  Coorperations are rarely magnanimous and if they “own” a planet they will try to weed out what they deem is unacceptable.  I just hope that there are Martians underground who will reject earthlings and not make the mistake native Americans made when euopeans came over in massive numbers.  Hey, you asked the question.  Ha, ha!

Robert Gibson II
As much as they can hold and defend.

Geof Fantastico
Nobody would recognize their claim.  If Mars had something to offer anyone a war would ensue.

David Grigg
There really are no rules which could be enforced from Earth. It would be like the messy colonization of North America all over again. Yes, that would involve wars.

Wendy Miller
If it was corporate, the country of origin would assume the whole thing was theirs, until they were called upon to defend or aid it.  Then there’d be so much arguing back here on Earth, it’d be a moot point.