The Trajectory of Dreams: Guest Post by Nicole Wolverton

When you’re writing a mentally ill woman who isn’t above a little murder if it suits her purposes, there’s a chance people are going to think you’re a little nuts yourself. Let’s face it, there’s a very real compulsion to assume there are some biographical details hidden in a novel. Who didn’t believe, on some level, that Fight Club was real, some elaborate marketing scheme Chuck Palahniuk cooked up to advertise extreme MMA fighting or something? I won’t lie—I kept expecting Fight Club franchises to start springing up.

When you read THE TRAJECTORY OF DREAMS, I wonder where you might see me in the novel. I don’t have a mental disorder, nor am I interested in killing anyone. However, Lela White, the main character in the book, does like books.  She reads a lot, and she likes learning. I admit that those traits are mine. I read a lot, and I tend to stockpile information on the off-chance that someone drags me off to the set of Jeopardy. Because you never know when that’ll happen, right? Right?

There’s one other place you can find me in THE TRAJECTORY OF DREAMS: I have a big yellow cat. Of course, mine is named Mayor McCheese, not Nike, and the Mayor doesn’t blink at me in Morse Code. Well, that I know of, anyway. Believe me, if the Major suddenly starts to communicate, everyone is going to know about it. I’ll take him on The Today Show or Good Morning America. We’ll tour the morning show circuit, then all those nighttime entertainment shows. What would he say? I don’t know. But hopefully he wouldn’t tell me his name is really Nike and then try to convince me to break into anyone’s house to observe sleep patterns.

Now that you’re worrying for my sanity, I’m sure you’ll be dying to trust me with your manuscript—for this stop of THE TRAJECTORY OF DREAMS virtual tour, I’m giving away a two-chapter manuscript critique. Maybe the Mayor will sit with me to read it and offer suggestions of his own. I’m kidding! About the Mayor, not the giveaway. All you have to do to win is enter below!

Publishers Weekly calls THE TRAJECTORY OF DREAMS (Bitingduck Press, ISBN 9781938463440) a “skillful mainstream examination of a psychotic woman’s final descent into insanity.” The novel exposes the chaotic inner life of Lela White, a sleep lab technician and mentally ill insomniac who believes she has been tasked with protecting the safety of the revitalized U.S. space shuttle program. She breaks into the homes of astronauts to watch them sleep, and she is prepared to kill to keep those with sleep problems from the shuttle launch. Her delicate grasp on reality becomes more tenuous when annoying co-worker Trina Shook insists on moving into her house and visiting Russian cosmonaut Zory Korchagin inserts himself into Lela’s life. Korchagin’s increasing interest puts her carefully-constructed world at risk of an explosion as surely as he does his own upcoming launch. Lela’s tragic childhood unfolds throughout the novel, revealing the beginnings of her illness and long-buried secrets, and as Lela’s universe unravels, no one is safe. Buy a copy of THE TRAJECTORY OF DREAMS at your local independent bookshop, Amazon, Barnes & Noble, or anywhere books are sold. 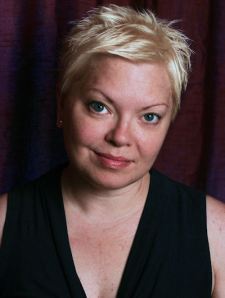 THE AUTHOR: Nicole Wolverton fears many things, chief amongst them that something lurks in the dark. From ghosts to stalkers, her adult and young adult fiction plays on the mundane and not-so-mundane things that frighten us all. THE TRAJECTORY OF DREAMS is her debut novel. She is a freelance writer and editor and lives in the Philadelphia area with her husband, dog, and two cats.

MORE STOPS ON THE BOOK TOUR FOR THE TRAJECTORY OF DREAMS=MORE CHANCES TO WIN!

A writer by birth, a redhead by choice.
View all posts by AmyBeth Inverness →
This entry was posted in Guest Blog Posts and tagged astronauts, guest post, mental illness, murder, Nicole Wolverton, Trajectory of Dreams. Bookmark the permalink.

2 Responses to The Trajectory of Dreams: Guest Post by Nicole Wolverton