SciFi Q of the Day: Canines

Usually I choose which of the SciFi Q’s to turn into a blog post based on the quality and quantity of comments across the board. But I have to admit that this time, although there are some great answers, I chose this one based primarily on David Collins-Rivera in the Google Plus Speculative Fiction Writers Community.

I’m going on hiatus for the month of April! I’ll still be asking questions, but this will be the last one I turn into a blog post until May. 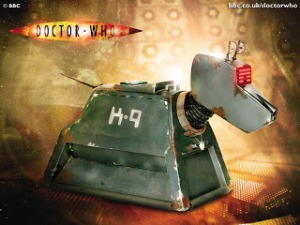 SciFi Question of the Day: Switch any two canines (live or robotic) from two different SciFi shows. What happens?

Sarah Barnard K9 takes over the first Enterprise, Porthos piddles all over the Tardis.

Barry Gavin K9 gets galactic a to earth faster

Barry Gavin Krypto the wonder dog on the tardis, the cyber men wouldn’t stand a chance, k9 zaps luthor in the ass

Jonathan Dalar  Is Alf a canine?

Jonathan Dalar  No doggie aliens?  Could be…

Ergodic Mage  George Jetson gets a great workout every day, but the Doctor fails to stop the Sontarans from invading Gallifrey.

raymond morris
THEY learn how to adapt in new environment and become smarter.

Eddie McGarrity  Battlestar Galactica defeat the Cylons in one bite, while Dagget breaks down in Metropolis Main Street

Levent Taskan
Overzealous K9 murders the entire crew of the Galactica with its forehead laser.

David Collins-Rivera
LASSIE
.
RUSTY:  What is it boy?  Has Bobby fallen down the well?!
.
K9:  Negative, master.  Sensors indicate the domesticated farm animal domicile is exceeding optimum temperatures for all known species upon this planet.
.
RUSTY:  Is the barn on fire, boy?!
.
K9:  Affirmative.RUSTY:  Go on, boy!  Go warn Pa!(K9 turns to warn Pa, and takes off at top speed.)
.
RUSTY:  Faster boy!  (Pause)  Go on boy!  (Pause, then walks slowly, keeping up with him easily)  You really have to run home, boy, it’s an emergency!
.
K9:  I am conveying myself at top speed already, master.
.
RUSTY:  (Pauses again, then picks up K9 and runs off with him)  It’s okay, boy!  We’ll go together!
.
==========
.
DOCTOR WHO
.
DOCTOR:  A directed burst of arrollian energy might have produced this kind of damage.  (Thinks a moment.)  But that could only mean…
.
SARAH JANE:  It could only mean what, Doctor? (He does not answer, and instead, turns to Lassie)
.
DOCTOR:  What do your sensors tell you, canine? (Lassie sniffs the air, then barks.  She trots over to a hidden door panel in the wall, and paws at it, whining.)
.
DOCTOR:  Good dog!  You’ve found the lair of the Soggas!  Come along, Sarah Jane!
.

A writer by birth, a redhead by choice.
View all posts by AmyBeth Inverness →
This entry was posted in SciFi Q of the Day and tagged David Collins-Rivera, Doctor Who, hiatus, K9, Lassie, Ruh-Roh, speculative fiction writers. Bookmark the permalink.

4 Responses to SciFi Q of the Day: Canines