Posted on October 27, 2014 by AmyBeth Inverness 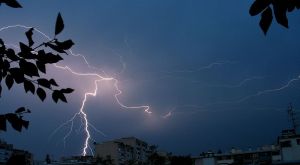 Emmanuel Boutet
Own work, copyleft: Multi-license with GFDL and Creative Commons CC-BY-SA-2.5 and older versions (2.0 and 1.0) via Wikimedia Commons

What the heck is a Thunderclap?

It’s a tool that allows people to coordinate their social media promotion, whether it’s just to say “Happy Birthday!” from a bunch of people all at once, promoting a book, or asking people to pay attention to an important social issue.

Here’s how it works:

To participate in someone else’s Thunderclap, you click on the link provided. This takes you to the Thunderclap site. A few simple clicks lets you authorize the program to tweet as you, post a facebook status update as you, and/or post to Tumblr as you. (You can choose which social media platforms to use.) If (and only if) the campaign gets a certain number of people to join in (100 for a small campaign) then at the specified time, the program will post the specified message from every participant.

Here’s an example: Your kid’s hockey team is playing their arch rivals next week. The coach starts a Thunderclap. All the parents, as well as a bunch of friends, join in. Then, on gameday, right before gametime, all those participants tweet/update “Go Team!” They don’t have to remember to do it… as long as they authorized the Thunderclap, it happens automatically.

To create a Thunderclap, you go to the Thunderclap site and enter in information such as your name, e-mail, description of the message etc. After entering the information, there is an approval period. When I did one, the ‘free’ option was a 3 day wait. You can pay money to have that wait time shortened. Once approved, you can start asking everyone to join in. If not enough people say ‘yes’ it just fizzes out and nothing happens. If you do get the minimum number of people, then at the specified time, your Thunderclap will go out.

Here’s a simple one for NaNoWriMo:

NaNaWriMo is National Novel Writing Month, which happens every November.Whether you’re participating, cheering from the sidelines, or watching from the peanut gallery, please join in with a tweet or status update to show your support of all the writers out there who are scribbling or typing like mad to reach 50,000 words by the end of the month.

The actual message to go out is “On your marks…get set…WRITE! Go go NaNo-ers! Good luck, and may the wordcount be always in your favor. #NaNoWriMo”

Life can be rough for some. For one man, life was insurmountable. One dead end after another lead him in and out of jail more times than he ventured to count. One such occasion changed everything.

Charlie Westlake is a man on a mission to bring together one of the top teams the universe has ever seen. On this trip, he will bring an empty man into the fold. Will he make it?

John Brooks enters the ISC in this, a prequel to Mirror Image.

The message to go out is “His whole life he fought for everything without a reason to fight. Before they met, she gave him a reason. http://thndr.it/1nwXf8m”

There are many independent business people and creative types who rely on word of mouth and social media exposure to promote their product. Whereas not everyone is going to buy their product or contribute to their fundraising campaign, donating a tweet or update is free and easy. Of course, if you do too many, it can get pretty spammy. But sharing the occasional bit of publicity is a great way to support an author, artist, or other small business person without spending any money.

Thunderclap. Not to be confused with Thundercats.

A writer by birth, a redhead by choice.
View all posts by AmyBeth Inverness →
This entry was posted in Commentary & Musing and tagged crowdfunding, K.G. Stutts, marketing, Mirrors, NaNoWriMo, new release, publicity, Thunderclap. Bookmark the permalink.