Posted on November 26, 2014 by AmyBeth Inverness 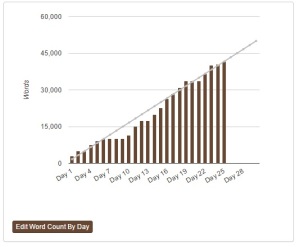 I am dancing with the goal line in NaNoWriMo. I started strong, then as expected dropped behind during the release of Cities of Luna and my goobear’s birthday. I caught up and got a little ahead, only to dip down again. I’ve been right on the line the past couple of days.

I’m confident I’ll reach 50k soon, although I’m not sure how long this novel will end up being. It might be 70k. We’ll have to see. I have a problem at this stage of novel-production that I tend to add too many complications. I need to stick with the basic idea and run with it.

I’ve frustrated myself the last two nights because I found two instances where I’d specifically foreshadowed something, then failed to follow through. For example, one character says “The other guy stayed back at that other place. I came here alone.” Then a couple of chapters later, I find that I needed to have both guys together all along.

I’m not going back to fix it now. I have a doc for notes, with a section dedicated to “fix this later.” That section’s getting kinda long.

ROW80 goals are NaNocentric, so they’re right on. I even wrote a rough draft and revision one of the next story in Cities of Luna and sent it off to my editor.

The Cities of Luna: Collection One

One Does Not Simply Walk Into Mordor coming in December!

A writer by birth, a redhead by choice.
View all posts by AmyBeth Inverness →
This entry was posted in NaNoWriMo, ROW80, Writing and tagged #ROW80, Cities of Luna, goals, goobear, Moon Dragons, NaNoWriMo. Bookmark the permalink.