Posted on January 28, 2016 by AmyBeth Inverness 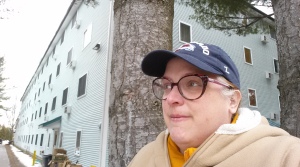 We’ve been in the hotel for a week now. To summarize: my parents sold the house we had been renting from them. For a long list of personal and practical reasons, we decided to move back to Colorado where I grew up. Hubby has been applying for jobs, but nothing has come through yet. We’re living in a mini-suite hotel for a few weeks while hoping that a job offer will come through.

Whether or not a job offer comes through soon, we’ll load up the mini-van and the Uhaul and head west in February. We may have to separate for a while, with hubby couch-surfing in Vermont so he can keep his current job, while I take the girls to Colorado Springs.

In all the chaos and uncertainty of moving, it’s been a huge comfort to know that all my writing work is on the computer and in the cloud. The only physical things I need to move are tools such as my laptop, and mementos such as my desktop tchotchkes.

My time, concentration, and almost all my spoons have been used up in the move. I stopped writing twelve days into NaNoWriMo, and I’m just now gearing up to get back into the swing. It won’t be a full swing; I’m just concentrating on The Cities of Luna for now. I won’t be expanding out to other projects until after we are settled in Colorado.

One fantastic thing about moving to The Springs is the Pikes Peak Writers! This is a wonderful group that is incredibly supportive of each other. We’ll be arriving right before the annual conference. I don’t know whether I’ll be able to attend or not, especially since my hubby might be in Vermont while I’m taking care of our girls in Colorado.

Between the Moon and NYC cam 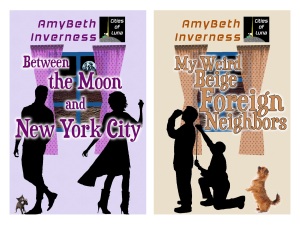 e out a few days ago, and My Weird, Beige, Foreign Neighbors comes out next month. A new story every time the moon is full!

I unintentionally have a cat/dog theme going on… the cat plays an important role in January’s story, and the dog figures into February’s story.

A writer by birth, a redhead by choice.
View all posts by AmyBeth Inverness →
This entry was posted in Commentary & Musing and tagged Between the Moon and New York City, Between the Moon and NYC, Cats, cats and dogs living together, Colorado, Dogs, hotel, moving, My Weird Beige Foreign Neighbors, the end of the world, transition, Vermont. Bookmark the permalink.

2 Responses to The Hotel