The Third Round’s a Charm 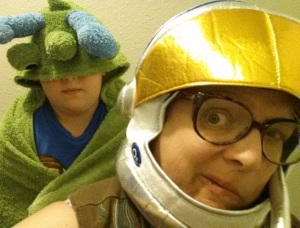 Photobombed by an Alien

Round Three Has Begun!
We’re off to a …well…we’re off.

I’ve been accomplishing a lot. The writing hasn’t been there as much as I need it to be, but it’s there. One night I stayed up until 5AM to finish a story. I brought a notebook to the fireworks show so I could write during the 5 hours leading up to the finale. However, even though it is now July 6, I have not added any words to my Camp NaNoWriMo project.

My goals for this round:

2. Promo something six days a week.

3. Finish The Beekeeper’s Mother by the end of July

I will be leaning heavily into getting my wordcount in, even when there is a ton of other work to do. All that other work is worth nothing if I don’t actually write. It’s good to have a story going in a notebook even if the main WIP is on the computer. If I add 100 words to the notebook, it still counts as a writing day.

I have two medium-term-goals that go just beyond this round.

First, I want to finish my urban fantasy novella  The Beekeeper’s Mother by the end of July, and have all the editing etc. done by the end of the summer so I can release it in October. It’s the second book in Lillie Lane, my urban fantasy series. Every novella is made up of three short stories. Each novella stands alone, with brand new characters. I’d like to put these out once a year.

2017 is the 50th anniversary of the beginning of the Apollo missions, beginning with the tragedy of Apollo 1 in January. I plan to put together a collection of The Cities of Luna and release it in November, both in electronic and paperback form. There’s a lot of work that still needs to be done…

New project? Or finishing up an old one?

A writer by birth, a redhead by choice.
View all posts by AmyBeth Inverness →
This entry was posted in NaNoWriMo, ROW80, Writing and tagged Camp NaNoWriMo, NaNoWriMo, The Beekeeper's Mother. Bookmark the permalink.

9 Responses to The Third Round’s a Charm