Posted on August 4, 2016 by AmyBeth Inverness

A fan of all things fantastical and frightening, Shannon Lawrence writes in her dungeon when her minions allow, often accompanied by her familiar, Cleo. She writes primarily horror and fantasy. Her stories can be found in several anthologies and magazines, including Under the Bed, Sanitarium, and the upcoming anthology, The Deep Dark Woods.

When she’s not writing, she’s hiking through the wilds of Colorado and photographing her magnificent surroundings. Though she often misses the ocean, the majestic and rugged Rockies are a sight she could never part with. Besides, in Colorado there’s always a place to hide a body or birth a monster. What more could she ask for?

1.      How did you come up with the title The Warrior Muse?
There’s a sculpture called “End of the Trail,” by James Earle Fraser that has always spoken to me (I’m part Native). It conveys so much, and the way you see it can change depending upon the day. Whether he’s coming from a battle lost or won, he has survived. He’s tired, but he’s not beaten. It inspires me. I have a small, marble version of the sculpture my mom gave me sitting on my desk.
2.      Do you think the trauma of your childhood, such as being chased by a shark, influenced your love of frights and flights of fantasy?
I don’t actually know what first got me hooked on darker things. Was it nature or nurture? My grandma took me to see Cat People when I was entirely too young to have seen it, but I was fascinated with it. I loved ghost stories, especially the real-life ones, because they told a story about real people, bits of history. Horror tells a story about a person you can identify with, because if you can’t identify with them, how can you feel for them deeply enough to be scared? And I like to be scared.
And the shark? Not terribly traumatic. It was just a baby. 😉 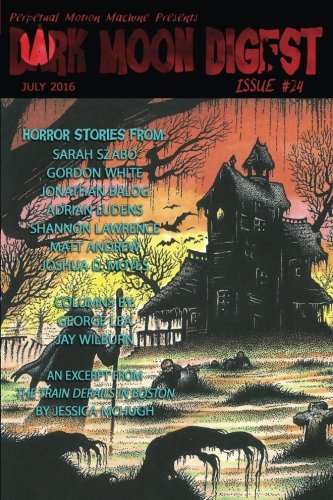 SHIFTING SANDS appears in this issue of DARK MOON DIGEST

This will probably change every time I answer it. For now, I’ll say “Ever After.” Drew Barrymore’s Cinderella was strong in a time when female characters usually weren’t. Some might qualify “Edward Scissorhands” as a retelling of “Beauty and the Beast,” and I always liked that movie. As far as books, Gregory Maguire’s books are what got me interested in fairy tale retellings, and I’d recommend those for sure. People are most likely to recognize the title “Wicked,” which is based on his book of the same name.
4.      What manner of scary is Shifting Sands?
“Shifting Sands” is a paranormal revenge kind of scary. The antagonist finally kills the wrong woman. This one’s actually set here in Colorado Springs, centered around Ute Valley Park.
5.      Do you have a preference of short fiction or novels?
I love both long and short form, both to write and read (and to watch–I’ve discovered some great short horror films on YouTube lately). I would say my first love in writing is the short form, but I don’t have a preference when reading. Collections of short fiction read differently than novels, because you have to digest each story individually, so I try to switch between the two.
6.      What are your novels about? What plans do you have for them?
I’ve got three novels in the works right now. One is a YA Post-Apocalyptic in which kids who were genetically modified to withstand the virus wiping out the population start coming into various types of powers as they hit puberty. The second is a contemporary fantasy about a woman born a myth stalker, whose job it is to track down supposedly mythological creatures. And the third is a horror comedy about killer squirrels, which I’m really enjoying playing around with.
I’d like to get them all traditionally published. Two of them are in edits, but I’m still writing the squirrels. It actually started out as a short story, which grew into a novella. Then I realized there was so much more I could do with it, and thus was born my second POV, bouncing me straight into novel-land.

7.      What is your favorite electronic writing tool?
My laptop. I do my novel writing with Scrivener, but just use Word for my short stories.
8.      What is your favorite non-electronic writing tool?
A nice, bold pen, and college ruled paper. I do a lot of my short story writing on paper.
9.      What would your ideal writing environment be like?
Quiet, isolated, comfortable. I like to have some music going, and some mint hand lotion, but those aren’t required.
10.  Have you ever visited the Stanley Hotel in Estes Park, Colorado, where The Shining was filmed? Isn’t there a haunted room there?

You bet! My husband gets me two nights at The Stanley each year in the off season, so I can go up and just write and be inspired. I love it there, the town, too. I can walk from the hotel into town and explore, eat at the hotel, go hiking in RMNP. There’s a Safeway within walking distance for snacks. And I don’t have to cook or clean!
There are several haunted rooms, and you can take a couple ghost tours to find out all about them. I like to stay up on the third floor, though it gets cold up there in winter. It’s the floor children were kept on when the rich folks frequenting the hotel felt children should neither be seen nor heard. Their nannies kept them upstairs. They say you can hear them rolling a ball around up there, but so far they haven’t wanted to play.
As for “The Shining,” Stephen King stayed there in the off season when the hotel was close to empty, and was inspired to write the novel. Kubrick, when making the original film based on the book, didn’t find The Stanley to his liking, and actually filmed in a hotel in the Oregon mountains. King took it back to The Stanley with his mini-series.
No…I’m not a fan at all…
11.  How involved are you with Pikes Peak Writers?
I’d say pretty involved. I’m currently on the Board of Directors as Treasurer, but I also just came off a stint working with the Pikes Peak Writers Conference as the Admin Director. Before that, I was the NCE (Non-Conference Events) Director for two years, and the Managing Editor of the blog, Writing From the Peak for a year or two. And I judge the writing contest, The Zebulon, each year.

Shannon and AmyBeth at the Mall

12.  What other Colorado writers (besides me, of course) do you think more readers should discover?

So many! We have a wealth of creative folks in Colorado, so I’ll try to stay close to the Springs to keep it simple, but I know I’m going to stray. If you like mystery, read Donnell Bell, Robert Spiller, Cathy Dilts, Barb Nickless, Becky Clark. For romance, Jennie Marts and Cindi Madsen. For speculative, Ashley Bazer, DeAnna Knippling, Patrick Hester, Mario Acevedo, Carrie Vaughn, Carol Berg, Jeanne Stein. For horror, Stephen Graham Jones. He’s making waves these days, and I think he has a brilliant and twisted mind. For fairy tale retellings, J.A. Kazimer. For true crime, Pete Klismet, local retired FBI profiler. As far as memoir, Page Lambert is amazing (and if you can ever attend a workshop or reading she’s doing, I highly recommend it.) I know I’m leaving out a ton of people, but these are just a few of the talented people around here.
13.  Who shot first? Han or Greedo?
Han, of course. Ask Harrison Ford.
. 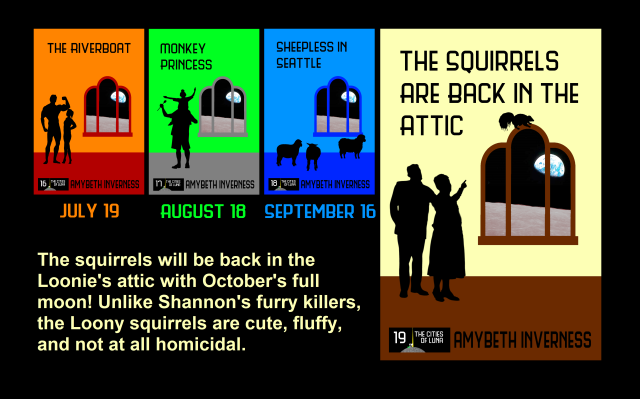 Shannon and I got together at the Citadel Mall in Colorado Springs to talk about vampires and zombies.

Facebook tends to choose whatever the LAST image is for a thumbnail when I share a link. So, here’s a lovely picture of the two authors together. Let’s see if facebook uses this picture instead of the ad for The Cities of Luna… 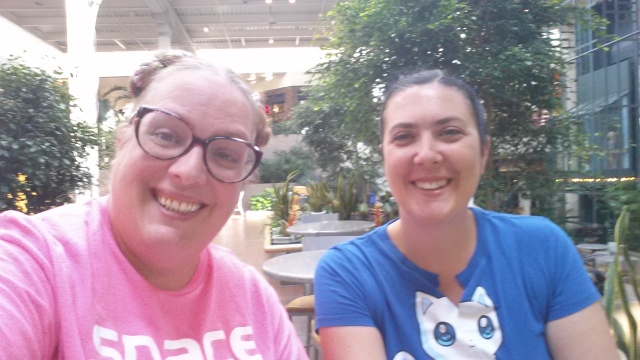 A writer by birth, a redhead by choice.
View all posts by AmyBeth Inverness →
This entry was posted in Interviews and tagged Colorado, fantastic, frightening, homicidal squirrels, horror, Sanitarium, squirrels, The Deep Dark Woods, The Warrior Muse, Under the Bed. Bookmark the permalink.

9 Responses to Interview with Shannon Lawrence