Jade, AKA The Shatterer, AKA Captain Haleola, AKA cool friend from high school back in the eighties!

For a while, I used to describe this aspect of her special needs by saying “when she does this, it’s like a four-year-old.” However, that description fails miserably. It can’t be broken down like that. She is simultaneously a child and a teen, in a way that defies description.

I have a tee shirt that says “Careful, or I’ll put you in my novel.” The joke is that writers take people they dislike, base a character on them, then kill them off. I don’t do them. I prefer Chaucer’s advice  “Ridicule is man’s most potent weapon.” I write in aspects of people whom I dislike, then I turn them into objects of ridicule.

I take bits and pieces from people I know, people I hear about, and people who exist only in my own mind and recreate completely new characters. An old friend asked me to kill her off in a spectacular fashion, so I wrote The Shatterer for her.

That same friend is going to pose for me tomorrow as the captain of a space station. We’ll take some fun pics I can use as inspiration for a story I’m working on. The Shatterer and the captain couldn’t be more different; they each embody aspects of my friend and of a dozen other influences. They are unique.

My ROW80 goals this week are… confusing. A large part of work was transcribing, which might count as “actual writing” but might not. A lot of time is going into the big picture of karmic everything, doing interviews and writing blog posts for the Pikes Peak Writers. Consider my kids went back to school last week and my sleep schedule has to be shaped around my duties as family chauffeur, it’s amazing how much I accomplished! Just… never enough real writing. It’s never enough. 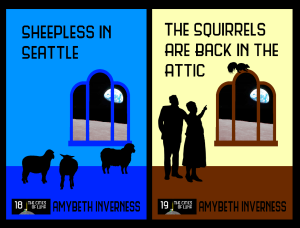 The Squirrels Are Back in the Attic is the story I transcribed today. It’s off to the editor. Sheepless in Seattle just came back from the proofreader, and I’ll upload it soon for preorder. The full moon is September 16!

Question for the writerly-folk:
Would you rather kill off a character with aspects of someone you dislike? Or reform them? Or, like me, ridicule them?

Have you ever based a character almost completely on a single real person?

A writer by birth, a redhead by choice.
View all posts by AmyBeth Inverness →
This entry was posted in Uncategorized and tagged Chaucer, Jade, Pikes Peak Writers, ridicule, Shatterer, sheep, squirrels. Bookmark the permalink.

4 Responses to The Mixture