Posted on October 14, 2011 by AmyBeth Inverness

My parents, many many years before I was around! Believe it or not, he has even less hair now.

I have never dedicated an interview to anyone, but this interview I dedicate to my father, James Lillie, who purchased almost everything John DeChancie wrote and then placed it in my hands. It is a true honor to be interviewing the man whose stories inspired and entertained me from my adolescence through today.

You can read a more biographical interview of John DeChancie, on his website. Here’s how it begins:

Q.  I’ve never heard of you. Who the hell are you, anyway?

A.  You’d be amazed at the number of published, well-known, and even award-winning authors I could name, none of whom you would know from Ugghh, the first guy to scratch his name on a cave wall. No offense, but how many writers can you name, just off the top of your head? I haunt bookstores endlessly, and run into writers I never heard of every time I scan a shelf. It’s amazing how many writers there are in the universe of letters. So – what was your question again? Oh, who am I, anyway. Well, I’m a writer of science fiction, fantasy, and horror. My name is on the by-line of about two-dozen books, and about the same number of articles, short stories, and odds and ends. Go to the bibliography link for details. Getting published was the shock of my life. For some absolutely inexplicable reason, people have actually bought and read my SF, fantasy, horror, and other stuff.

1.       How prolific was your juvenilia? Will any of it ever see the light of day, or should it all remain forever hidden in the back of a drawer?

I’ve used some of those stories and story fragments in my published novels. Ideas, settings, characters, etc. They are here and there in my work, but it’s going to be difficult to separate them out now.

No. I give a lot of books away, but no one has ever demanded a copy.

3.       What are the differences you’ve seen in the path to publication you took with your first book, and the many other books you’ve had published through the years?

I had to do the unsoliticited bit only once, with my first novel. From then on, it was writing under contract. But publishers are reluctant to buy anything that’s a few chapters and an outline, unless it is from a super-best selling author.

4.       Have you ever had an agent or publisher suggest changes that you were reluctant to make?

Yes, on some work-for-hire projects, like the two political biographies, Peron and Nasser and a couple of novelizations of (really original novels based on) an RPG game. And for at least one of my collaborations, there were some heavy changes ordered.

5.       As an author with a number of novels written well before e-books became popular, what happened in order to make these older books available in the new format?

I was approached by an e-book publisher and they said they’d like most of my backlist. I said OK. They picked and chose, and I might get the rest of them into e-form very soon.

6.       Do you frequently have writers take you up on your offer of writing help for a fee? Is this something you enjoy doing, or is it frustrating to see what kind of writing comes from someone whose writing skills are less than professional?

I now work on those projects through Writers Digest magazine and their Writers Digest University program. I also write courses and workshops for them. Sometimes work like this is difficult, but for the most part I run into lots of talented people.

Tim Powers is a good guy. So’s Robert J. Sawyer, Larry Niven, Jerry Pournelle, Barbara Hambly, and of course Harlan Ellison, when he was attending more cons than he does now, which I think is maybe one a year. But my true goombah buddy is Thomas F. Monteleone, the horror writer and Bram Stoker Award winner.

8.       Have you and John DeLancie ever been at the same con? Do people ever confuse the two of you?

I have never been to a Trek con, nor any con where DeLancie was a guest. I honestly doubt he even knows of my existence, although a fan might have mentioned my name at one time or another.

US_Nessie: Dear Mr. @johndelancie . Have you ever hear of sci-fi author @John_DeChancie ? And has anyone ever confused the two of you?

And OMG, a day later, he answered!

johndelancie John de Lancie: @US_Nessie No. But I’ll look him up. Thanks.

10.   At LOSCON 38 will fans find you at the Ice Cream Social, Regency Dancing, and Filk Singing? Or will you just be doing the author stuff?

I usually show up for the main events. Even for filk sometimes. Not always, but sometimes.

11.   What can we expect to see from you in MONDO CULT magazine later this year?

Oh, let’s see. There’s a retrospective article on the classic film of JOURNEY TO THE CENTER OF THE EARTH, the one starring James Mason, Arlene Dahl, and Pat Boone. What else. A review of a recent DVD release of a very low budget sci-fi potboiler. And…oh, another retrospective, this one on the classic British adaptation of FIRST MEN IN THE MOON. 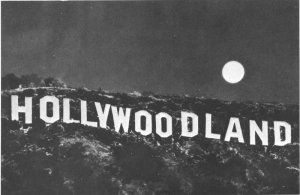 12.   You recently traveled from Los Angeles, CA, to Pittsburgh, PA. It rained in LA during that time, while Pittsburgh enjoyed unseasonably pleasant weather. Was this just a coincidence?

Probably, but I do possess the Jewel of Judgment.

13.   You have a long list of interesting projects on the Internet Movie Database. Where can I rent Boogie With the Undead? I’d love to see you as a Druid!

You can buy it, probably. Rent? I really don’t know. The sale price would probably be minimal, as much as the rental. I doubt Blockbuster carries it, but you never know. I know nothing about the distribution of that movie. 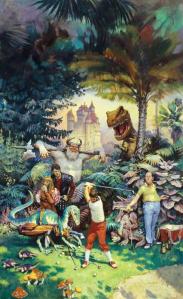 14.   While perusing your website, I see a few hints that fans of the Castle Perilous series might soon see a ninth book, or even a television series! Is there any news you can share?

Not at the moment, sorry.

15.   Could you name all the awards you’ve received off the top of your head, or would you have to refer to your notes?

ALL the awards, huh? The one I’m most proud of is the Forrest J Ackerman Award for Lifetime Achievement in the Field of Science Fiction and Fantasy. A full-cast audio production of my novels won the “Golden Headset” award for audio books.

16.   What is your favorite electronic or digital writing tool?

I use Word, and…well, that’s about it. I don’t use anything else. What would I be using besides?

17.   What is your favorite non-electronic writing tool?

A notebook and a felt-tip pen.

18.   Is it true that if you see a new Italian guy on the block that can give you competition – ba-da-bing, you have him whacked? Is this the real reason there aren’t many great Italian Science Fiction writers?

19.   If you could build a roller derby team by taking one character out of any five different  fictional stories, what stories and characters would you choose?

I don’t have a Wookie in that fight. 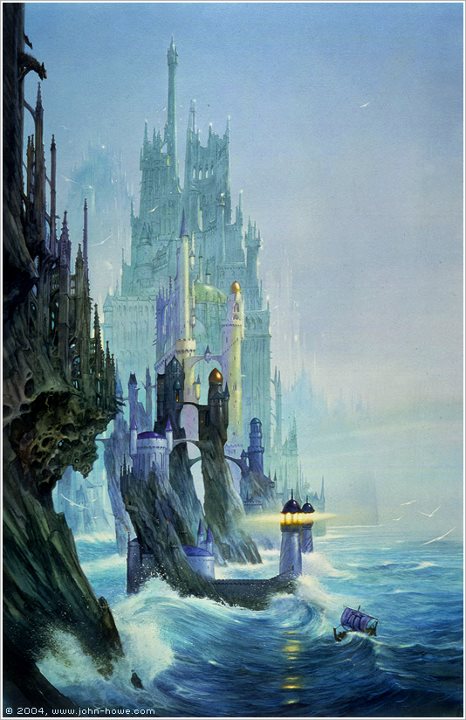 An image of Castle Perilous by John Howe

Fans of my blog might also recognize John DeChancie’s handsome face as a character in my short story (which is now becoming long enough to qualify as a novella) Synaesthesia. Atticus is a scientist and mathematician who develops an unusual relationship with a chrononaut named Kennealy.

A writer by birth, a redhead by choice.
View all posts by AmyBeth Inverness →
This entry was posted in Interviews and tagged Atticus, James Lillie, John DeChancie, LosCon, LosCon38, Roller Derby, synaesthesia. Bookmark the permalink.

1 Response to Interview with John DeChancie