Posted on October 18, 2011 by AmyBeth Inverness 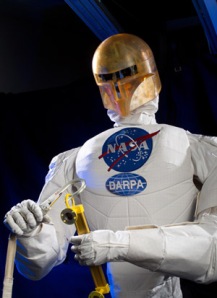 Before I even started this blog, I would occasionally pose a SyFy Question of the Day to my facebook friends. Sometimes, it was directly related to what I was writing, and I really did want some input to help me decide what direction to take with the story. Other times, it was purely fun. Here’s one of my favorites, from June 2011:

SyFy question of the day: Why make robots humanoid, other than for the familiarity and novelty?

US_Nessie           And it’s considered rude to “check” whether they are male or female when one does meet them in person.

Geri                       Because humans are programmed from birth to look for human characteristics. If a robot doesn’t have them, humans will ascribe them…which gets creepy. Paranoia sets in, people start violently dismantling their robots, anarchy sets in, and civilization teeters on the brink of oblivion. You know…or else people just won’t use them.

Geri                       See that’s the thing…R2 was completely NON human in any way – no arms, wheels, random round and/or square bits. It’s gotta be one way or the other, so if the robot needs to be able to do fine manipulation (or stairs) it’s gotta be humanoid or you move into the creepy anarchy scenario again. LOL

US_Nessie          Some of us (esp the writer types) count on your willingness to embarrass yourself publically.

US_Nessie         I have a stablefull! Though some are refusing to comment on this one…

Post Script: I’ve wavered back and forth about the whole SciFi vs SyFy thing for a long time. Saving just one little letter in a tweet isn’t really saving much, and the Polish translation is a really strong argument against SyFy! I’m not one to make changes lightly. But I think that, at the end of this year, along with other structural changes I might make to the site, I will change SyFy Question of the Day to the name SciFi Question of the Day.

Joe will be happy.

The previous SyFy Q of the Day is Sugarwater or Saltwater

The next SyFy Q of the Day is Enough ___ Already!

A writer by birth, a redhead by choice.
View all posts by AmyBeth Inverness →
This entry was posted in SyFy Question of the Day and tagged humanoid robots, robots. Bookmark the permalink.

2 Responses to SyFy Q of the Day: Humanoid Robots