Posted on November 6, 2011 by AmyBeth Inverness

Prologue: Last Thursday my hubby delivered me to the train station so I could go down to North Carolina to be with my parents as my father underwent double bypass surgery (AKA Open Heart Surgery.) Fortunately, he came through it fine, and is now working on his long road to recovery. 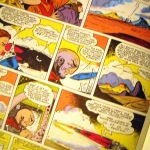 I was immensely relieved when friends from college (Yeah… that long ago. Nineteen Eighty-something.) offered to let me stay with them when I came down to NC. It is a complete and utterly amazing coincidence that they, whom I met at college in Wyoming, happened to move to the same city where my parents spontaneously retired several years ago.

I am loved. I was picked up at the train station and allowed in the car even though I was rather stinky after 22 hours of train travel. I have been fed, listened to, provided with an internet connection and given a warm bed in a nice, private room.

But that is not all that lets me know I am loved. I lost track of Dan & Geri sometime after we all got married and I ended up moving back east. Thanks to facebook, we reconnected a little over a year ago, and were amazed to discover they lived very close to my parents. When I came to their house a few days ago, Dan brought out a very large, very old book, and said “Look what I found!”

A little background: Hubby and I have been cleaning out the garage, basement, and every other storage place, getting rid of as much stuff as possible and carefully re-packaging and labeling those boxes that contain sentimental stuff we want to keep. A common label I apply is NWILF. This stands for Not What I’m Looking For. One of the things I’m looking for is a map of a fantasy planet I drew about twelve years ago, and haven’t seen in at least six years. One of the other things was a very large book titled The Collected Works of Buck Rogers in the 25th Century.

Apparently, when I was leaving Wyoming after dropping out of school, I left Geri a box with a few things I couldn’t take with me to Vermont and I couldn’t bear to throw away. Even though she’s moved at least a dozen times, she still had that book, and now it’s mine again.

I was flabbergasted to find that Geri kept this book so long, especially considering the moves. I know I’ve lost quite a few things in the many moves I’ve gone through in the last twenty years. Holding onto something for a friend through so many years is an act of love I will remember forever.

A writer by birth, a redhead by choice.
View all posts by AmyBeth Inverness →
This entry was posted in Commentary & Musing and tagged Buck Rogers, Dan & Geri, NC Narrations, North Carolina, NWILF. Bookmark the permalink.