Posted on November 4, 2011 by AmyBeth Inverness

After earning two graduate degrees, practicing law awhile, and then working for the public school system for over ten years, Del Dryden finally got a clue. She tossed all that aside and started doing what she should have been doing all along, writing novels.

When not writing or doing “mommy stuff” she reads voraciously, noodles around with html and css coding, and plays computer games with her darling (and very romantic) husband. She is fortunate enough to have two absurdly precocious children, and two delightful mutts. She and her family are all Texas natives, and reside in unapologetic suburban bliss near Houston.

1.       You had a very full professional career before becoming a writer. How does this background affect your writing style?

I like to think education is never wasted (this may just be how my brain rationalizes all those student loans). Learning to “think like a lawyer” is not unlike learning to think like a writer, in that both mindsets require a certain objectivity in viewing people and their motivations. And the psychology-related degree probably just exacerbates my already overdeveloped tendency to analyze people, but that works great when it comes to analyzing and developing characters. Like I said, education is never wasted! Sometimes it’s just applied a bit differently than the educators probably ever dreamed 😉

2.       How many different genres have you written? What ties them all together?

I think what ties these all together is an emphasis on character. For me, regardless of genre or setting or heat level, the writing is always about the characters and their interior journeys.

I co-founded gee/k/ink with fellow writer Daisy Harris, following a long twitter and email conversation about the rise of “geek girl” culture and how great that was, and how there seemed to be an overlap between geeks and kinksters online. Daisy and I pulled in some of our favorite fellow kinky geek girls, Christine d’Abo, Charlotte Stein, Sommer Marsden and Danica Avet. Basically we all saw a niche, and decided to fill it with erudite discussions of popular cultural trends and cutting-edge sexual analysis. Instead we ended up focusing on goofy posts about alien peen and prurient speculation about the sex lives of superheroes! Seriously, if you read the blog, there is a high probability you’ll see a post involving alien peen, and an almost one hundred percent chance of seeing gratuitous pix of hunky dudes from science fiction movies/nerdy tv shows. Fair warning.

A romance featuring nerds! Written by a nerd (me), primarily for nerds or those who enjoy reading about them! There’s something delectable about putting two or more shy, hyperlexic, socially awkward characters into a situation where their hormones short-circuit their ability to reason. I love to read it, and I adore writing it! I believe it was Christine d’Abo who coined the term, in reference to an upcoming Carina release of mine with a Dom hero who’s a rocket scientist and a submissive heroine who writes code…for science!

A nerdgasm is the reaction a nerd has during/after the reading of a well-written nerdmance.

Yikes! Got a few hours? The short answer: steampunk is science fiction with a Victorian flavor, either based on an alternate Victorian-era reality in which steam/clockwork technology is more advanced than it actually was, or on a constructed post-Victorian reality in which steam/clockwork power and technology remained the dominant modes, rather than petrol or other later technologies like computers. But that’s only a sorta-answer. I have a longer description on my blog, with links to some other resources. 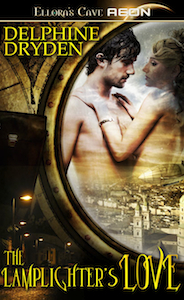 7.       What was the spark that ignited The Lamplighter’s Love?

The Lamplighter’s Love started as a much shorter story targeted to a steampunk anthology (it was rejected). Then I expanded it, made more of the holiday setting, and subbed it elsewhere for a steampunk holiday call (it was rejected). Finally I rewrote it as a novella and sent it to my fabulous editor at Ellora’s Cave (she bought it). The original scene was the one where Mary is strapped in the Chair, and the idea for that came from a stock photo I saw while browsing for a picture for something unrelated.

9.       Do you have rules that define how steamy you write your sex scenes?

11.   What is sexy about the undead in Love With a Chance of Zombies?

LOL! Nothing is sexy about the undead. They’re icky! Actually there are no undead in Love With a Chance of Zombies; the zombies are just unfortunate victims of a virus similar to rabies, and there isn’t actually a supernatural element involved (at least not in that book. If I ever write another book set in that world, I may delve into that a bit more).

And in fact, the hero isn’t quite a zombie yet anyway, as the premise of the book is that Lena, the heroine, is helping him find a way to keep from turning after he’s bitten. Fortunately Lucas, the hero, is a phenomenal medical researcher, so he has some great skills to fall back on in his quest to not become a lurching, slavering brain-eater. Suspense and science! And, of course, sex.

12.   Can you describe the path that led to your first publication?

Mine is the most boring publication story ever, I’m afraid. I wrote a book called When in Rio (during NaNoWriMo!). I polished it, then sent it off to Avon, Kensington, and Ellora’s Cave, and Ellora’s Cave bought it. Actually, EC offered a revise and resubmit on that first book, then while I was working on that revision my editor at EC flat-out bought another submission from me which actually became my first published book (Snow Job, which was also a NaNoWriMo book).

13.   You are published through both self and traditional means. What do you consider when deciding which avenue to take?

The self-publishing was really just an experiment, and I don’t know that I’ll try it again because it takes a tremendous amount of work that I think I’d probably rather leave to others.  I think it works best (with a few very rare exceptions) for those who already have a very well-established platform and base of readers who will automatically buy anything the author puts out. If I get to that point some day I might try it again, but at this point I’m happy focusing on just writing the books.

14.   How did you find your editor? Does she work on all your releases?

Which one? I have several! At Ellora’s Cave, my editor is the fabulous Kelli Collins. She was my acquiring editor there and has kept me ever since, much to my gratitude and delight. For Carina Press, I’m going to be working with Deb Nemeth on the aforementioned nerdmance. I have a few friends who’ve worked with Deb and they all say wonderful things about her, so I’m really looking forward to that. For my self-pub, Love With a Chance of Zombies, I was fortunate enough to have the help of the incomparable Ruthie Knox, who is an editor in real life when she isn’t being an insanely talented writer.

Mostly, like a lot of writers, I rely heavily on a network of trusted beta readers who are also writers, to read stuff before it ever gets to the point of being released or sometimes even submitted. Ruthie beta-reads for me, as do Christine d’Abo and Daisy Harris, and I return the favor (you get great feedback from beta readers, you learn a lot about writing craft when you read that feedback and when you read for others, and the added bonus is you get to read some awesome books before anybody else. I’m currently reading a late revision of Christine’s upcoming Carina release, Calling the Shots, and enjoying every second of it!).

15.   What was the process like to create your cover art? Did you have a lot of input, or just a little?

Much as with the editor thing, this varies from publisher to publisher. Ellora’s Cave and Carina both have forms the author fills out to provide the cover art department with information about the book, and of course you can request certain elements be considered for the cover, but for the most part the input ends there and the cover artists create something they think will work best to sell that book. Sometimes their vision meshes with yours, sometimes it doesn’t, but unless you have some strong objection to the cover it’s usually out of the author’s hands once the form is filled out.

I did the cover for Love With a Chance of Zombies myself so had full artistic control on that one. 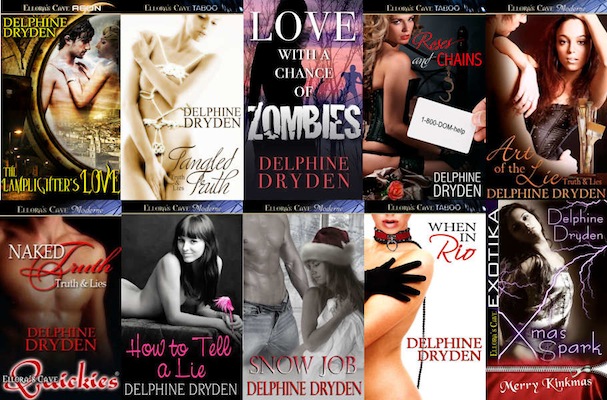 16.   How do you promote your books? In your experience, what works and what doesn’t?

I’m the worst at self-promotion, but I’ve had the best results from just being active on twitter, keeping my web site current, and also placing ads at some blogs/sites I think are likely to be frequented by people like me. Lately I’ve focused less on advertising at the traditional online places (book review sites and romance genre blogs) and more on places that aren’t inundated by book ads; humorous blogs and web comics that I read regularly, in particular. I’m planning to do more of that in the future.

17.   What is your favorite electronic or digital writing tool?

18.   What is your favorite non-electronic writing tool?

Moleskine notebooks. I have a bit of an addiction.

19.   What is the most persistent distraction from writing?

It’s a tossup between kids (especially my homeschooled 6th grader), dogs, and twitter.

Han! I have strong feelings about this. Lucas has long since lost all his geek cred with meanyway, but I thought the attempt to change the order of these particular events after the fact went way beyond geek considerations and violated the integrity of the story and the character.  Moral ambiguity was a hallmark of Han Solo’s character (it’s a hallmark of that character archetype). If Greedo shoots first, and Han is only reacting, that also makes Han boring and robs his character of its core power.

1 Response to Interview With Del Dryden