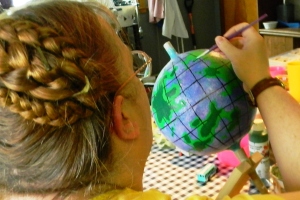 I used to relax every evening by sitting in the living room, watching TV, and doodling architectural plans on graph paper. Sometimes it would be a simple house, but more often it was castles. Vast, tall castles with towers and turrets, all with working floor plans and logical progressions (most of the time) to carry the loads.

After earning a degree in architecture, I went to work teaching computer skills to architecture students (and a few other majors.) I still doodled, but gone were the dreams of someday seeing my castles become a reality. Well, I think I always knew the castles would never be real, useful things, but I had other designs and other ideas that were (slightly) more practical.

One thing you lean in architecture school is that, before you ever get to design something creative, you will spend years drawing boxes in CAD from other people’s ideas to other people’s specifications. Of course, there’s also the possibility of designing more fanciful structures for the virtual worlds of video games and movies, but I never explored that. Nor did I go on to design school for either kind of architectural work.

I have numerous plans for buildings that show up in my stories. I like having consistency, so that if a character looks out her window and sees the driveway, I can’t later go back and say that they can’t see the driveway. Sometimes I find myself more wrapped up in the architectural plan than in the story itself.

Since I decided to be a serious writer, I’ve put aside the architectural doodling in favor of wordcrafting. But at the end of each rough draft, I need to get my brain away from the story for a while. Usually, that means switching to a new WIP. But I’m thinking that maybe, before I do that next time, I’ll take a little time and do a little doodling. Maybe taking a break from words altogether will help my brain reset itself even better than simply switching from one story to another.

What do you do when you finish a WIP?

A writer by birth, a redhead by choice.
View all posts by AmyBeth Inverness →
This entry was posted in Commentary & Musing and tagged architecture, plans, practical ideas. Bookmark the permalink.