I’m Texas born and raised, an old fashioned, bling-loving girly girl. I love to read and write stories of men and women, men and men, and the sizzling chemistry that draws them together. My heart is helplessly bound to romance of a time long gone—gritty, sexy stories of men in fedoras and overcoats. Old Spice Aftershave, Lucky Strike cigarettes, fancy cuff links, hair pomade, mobsters. Clandestine whispers on Bakelite telephones from the shadows of cheesy restaurant phone booths. Stories of a time when sex was all the more sexy because it wasn’t plastered on every billboard—no naked Joes and dames in every ad in every magazine. Lovemaking—hot, sweet-and-naughty, a secret between lovers. My make believe world is sex and danger, hotter than Hades.

1.    Why do you use an image of Rita Hayworth as an avatar?

Because she’s prettier than me. lol…Seriously, I wanted a female from the era I love—the Golden Age of film—but one who was glamorous, gutsy, maybe a bit naughty. So many stars fit the bill, but there’s just something about Rita.

That’s a Marilyn Monroe quote, and it just suited my soul. And it was part of my desire to reflect that I embrace my womanhood. That I love being strong, independent, but I am female—lace, powder puffs and Chanel No. 5—at the core.

I like to think of womanhood as a beautiful lioness. Strength, fierceness, intelligence, mysterious and graceful.

4.    Have you ever experienced criticism for being a woman who writes M/M romance?

I personally have not—or at least not to my face. But I have seen much of it around me, directed at female m/m authors in general.

5.    Have you always considered yourself to be a writer, or was there a time in your life when you decided that is what you were?

Ever since childhood, I’ve written or at the very least did stories in cartoon-style drawings. But not until the last few years did I consider myself as a writer. Not sure it that changed when I first decided to write for publication, or if I’d really been so all along. 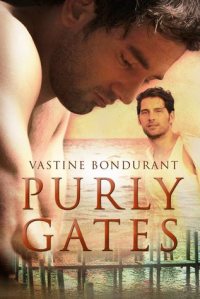 6.    What was your path to publication for Purly Gates?

Purly Gates was such a fun experience. It was self-published. It’s not the easiest way to publication, a lot is involved, a lot of recruiting for things such as cover art, formatting, editing. But I wouldn’t trade the experience for the world.

7.    During the editing process, were any changes suggested to you that you were reluctant to make?

Not for Purly Gates. Any suggestions from the editor were much better calls than mine. LOL.

9.    Did you research this setting as you wrote?

In a round-a-bout way, I’d been researching the setting all my life. I live, breathe and practically eat the era, and have read so much and seen so many documentaries and films, it’s almost like second nature for me now.

10. How much writing did you do before being published?

Serious writing, about a couple of years. My first published book was titled Candy G (under the pen name C. Zampa) in 2011.

11. Do you have any of those proverbial “Books in the back of the drawer that will never see the light of day?”

YES! And for a very good reason! They stink! LOL.

12. What is your favorite electronic or digital writing tool?

You know, I am such a relic, I’m not sure what that means. I use Word Office version for my documents, but that’s about as far into the tech side as I know.

13. What is your favorite non-electronic writing tool?

Do those still exist? LOL.

14. What is the most persistent distraction from writing?

The desire to stop and read or watch films.

15. Many writers go through a stage when they hate what they’re writing.  Do you ever feel this way?

All the time. I love the beginnings, then about mid-way….ugh. Hate the storyines, hate the characters, hate it all.

16. What is your ideal writing environment? Have you ever been able to create it?

My ideal would be a very serene, quiet, small place—maybe on the beach or overlooking mountains. But in reality, my ‘hide-a-way’ is the dining room of my apartment.

17. Do you have rules for how steamy you write your sex scenes?

I’ve learned to keep projects close to the vest, and only divulge to my betas and critique partners. But I will be starting, very soon, my first hetero romance under the Vastine pen name.

19. Where do you draw the line between inspiration and imitation?

Good question! I’ve been rolling about this for a bit now. Personally, I try to refrain from creating storylines that are too close to other authors’.  I like to be original with my own stories. Sure, I see some stories that grab me and it is so tempting to reconstruct them in my own voice. But then I just feel it’s imitation.

Han shot first, but I confess I had to google to find out. LOL

A writer by birth, a redhead by choice.
View all posts by AmyBeth Inverness →
This entry was posted in Interviews and tagged being a woman, C. Zampa, Candy G, Marilyn Monroe, pseudonym, Rita Hayworth, woman who writes m/m. Bookmark the permalink.

7 Responses to Interview With Vastine Bondurant