Posted on January 24, 2013 by AmyBeth Inverness 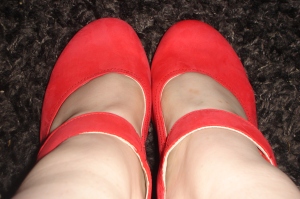 When not behind her desk, she can mostly be found in the dark of the cinema or nose-deep into a book.

She is a firm believer in the healing powers of coffee.

1)  Have you always considered yourself to be a writer, or was there a time in your life when you decided that is what you were?

Gosh, that’s a tough one! I think at some point (about two years ago) I decided I was a writer. Until that point, I always said I wanted to be one, but I realized that I am actually one because it’s what I do most often and what I love most.

2)  Are you a writer who blogs or a blogger who writes?

Blogger who writes. I started blogging two years ago, and the writing came about seven or eight months after the blog.

3)  How widely are you known as The Bare Naked Lady? Do you have a Lady Godiva complex?

Gosh, I haven’t a clue. I think that some people do know me solely as The Bare Naked Lady, which is quite lovely actually. And no, I do not have a Lady Godiva complex. I do however like The Barenaked Ladies… But what the name and the title of the blog (Lady Laid Bare) refers to is me laying myself bare with words. It’s a disappointment for people expecting lots and lots of nudity….

4)  What was your path to publication?

After a long conversation with a friend of mine (this was on holiday in London) I came back with the intent to write. Throughout September, I worked on a story called Stockings and Santa, which I sent off to a publisher called Naughty Nights Press for a Christmas-themed anthology. A month later, I got an acceptance letter in my inbox. The day after my 21st birthday, Doing The Naughty List, Twice was published.

5)  What is your Zero Day Project?

A few months ago, my mate Rhye asked me out of the blue if I would be her Day Zero buddy. I thought she was asking me to go on some sort of complicated diet with her, but when she explained it, I was sold.

Day Zero is basically a worldwide project. What you do is make a list of 101 goals to fulfill in the space of 1001 days. And then you set out to fulfill these goals. Rhye and I started a blog, to log our goals

7)  Can human sexuality be divided into heterosexual, homosexual, and bisexual, or is it more complicated?

I think it’s way more complex than that. But I wouldn’t be the right person to ask.

8)  Do you have rules for how steamy you write your sex scenes?

Nope. I just write them as they come on in my head. If they involve ripping at clothes and desperate panting, then, huzzah, it worked!

9)  What is the most memorable (or disturbing) thing Tiffany Reisz has ever tweeted?

Well, Tiffany is quite a legend for tweeting memorable things, but one of the more disturbing ones was yesterday when she tweeted “I ❤ Jon Cryer”….

Not that I don’t like Mr. Cryer but… yeah.

10)  Did you write Mark Me before or after you heard the call for submissions to Felt Tips?

After. It took me a while to brainstorm but it eventually got on paper.

11)  What other anthologies has your writing appeared in?

12)  What social media do you use? Do you combine your personal and professional or keep them separate?

I am a total Twitter maniac. I’m on there most of the day. I sometimes use Facebook, but not as frequently as I used to. I don’t have a “vanilla” Twitter, so my personal and professional are combined. I don’t see the need to have a Twitter for my non-writer self, as she would probably say exactly the same thing as my writer self.

13)  Many writers go through a stage when they hate what they’re writing.  Do you ever feel this way?

All the time. Sometimes I write something and think it’s good, but after a night of fretting, I’ll go back and say, bloody hell that was s****.

14)  What is your favorite electronic or digital writing tool?

I’m sticking with the good old laptop with Microsoft Word on it. Never fails me.

15)  What is your favorite non-electronic writing tool?

Pen and fancy notebook. Although, the prettier my notebook is, the least likely I am to work in it because SHINY.

16)  What is the most persistent distraction from writing?

Twitter and television. I love them both to death, but sometimes they mess up my writing abilities.

17)  What is your ideal writing environment? Have you ever been able to create it?

My ideal writing environment would be somewhere pretty and quiet with nature noises in the background. Unfortunately, I’m still saving up for that cottage in the countryside, so no, I’ve not been able to create it…

18)  What are your long-term goals as a writer?

Currently, I have two. One is actually getting a full length novel out and two is going on an Arvon or Faber writing course.

19)  When the day comes that you are on stage, accepting some prestigious award, who are you most likely to forget to thank?

It would most likely be my own mother, because yes, I am THAT forgetful.

Please don’t walk away from me!