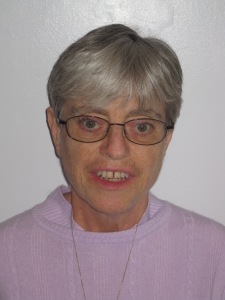 Cynthia Racette has been writing all her life, as a newspaper reporter, editor and novelist. She even asked for (and received) a play typewriter for Christmas when she was about ten.

To be near her children and granddaughters, she and her newly retired hubby, moved to the Buffalo, NY area. Through her daughter, who is also a writer, she got hooked up with RWA (Romance Writers of America) and good things started to happen.

She is now writing more novels, taking lots of trips and relaxing by the pool on gorgeous summer days in Western, NY.

1.       I’m 42 and still feel squeamish when I think that my mother might read one of my stories that (GASP!) contains sexual content. Has this ever been an issue between you and your daughter?

A: To a certain extent. I do feel a little uncomfortable when I read her sex scenes. I did so especially at the beginning but I got used to it. Her father refuses to read one because she’s, well, his little girl. But I want to read everything she writes because she’s an excellent writer and I’m so proud of her. I influenced her to love writing and I love to see how that paid off. She’s very ambitious and she’s going places, that girl.

A: Admittedly, that was a little harder to take but she does it so well I enjoy it anyway and try not to think about how she used to throw fits or stomp around when she was little.

4.       Have you ever taken one of Cassandra’s writing workshops?

A: Yes. She gave her lesson on marketing and branding to our RWA group a while back. I think the reception she got for that was her impetus for making it into a regular course to offer on the net. It was the first one she did. She’s very good at that one because she was a marketing person before she started writing full time.

A: I think probably the one releasing late this spring, Uncharted Fate. It’s about a woman whose life goes into a tailspin when her husband is killed suddenly in a car wreck. I know she liked Windswept, my debut, too, but I don’t think I ever asked her if she had a preference.

7.       In my September 2011 interview with Cassandra, her debut novel Talk to Me was only a few months old. How many books have there been since then?

A: Oh, I lose track. She’s such a prolific writer– she writes fast (and types fast) and works long hours. I think it’s somewhere like ten but she also has some short stories added on to that. I have one novel and two short stories and soon will have two novels and three ss.

8.       Have you ever mistakenly called your daughter by her pseudonym when she’s around family or called her by her real name when she’s at a book event?

A: I’ve never called her by her pen name anywhere else but I have caught myself almost calling her by her real name in book events and on FB. I used to do it more often but she called and “reminded” me a few times. It still feels weird though.

10.   How do you think your experience as a newspaper reporter influenced your daughter to become a writer?

11.   How did your daughter’s success as a writer influence you to write fiction?

A: See above. LOL  I wrote the fiction first. I know that’s probably not evident in my bio, but she copied me, not vice versa. But she has far surpassed me as a writer now.

12.   Would you and Cassandra consider collaborating on a novel?

A: I’ve asked her but she’s so busy at the moment she doesn’t have time. That would be my dream after our shared history but not yet. The closest we’ve gotten is an anthology called Close Contact where she and I both wrote short stories.

13.   Where did Cassandra get her love for hockey?

A: Our family has always loved hockey and we used to have season’s tickets to the AHL affiliate in Binghamton, NY.

A: It is, but not as bad as it’s reputation would lead you to believe. Many of our friends couldn’t believe we were retiring to Buffalo instead of FL. But family is very important to us and our two daughters and young grandchildren were there. We do spend March in FL to get some sun but spring, summer, and fall are beautiful in Buffalo.

16.   Would you wear a corset if the party theme called for it?

A: If someone held a gun to my head. I’m a little old for corsets. Cassandra looks good in one though.

17.   Cassandra refers to her daughter as “Too Cute for Words.” Is this accurate, or is she biased?

A: Oh, totally accurate! She’s a sweet little dark blond imp with sparkling eyes and a smile on her lips. Smart as the dickens and she asks the most amazing questions– questions that make you wonder why on earth a four year old is even thinking about that! She loves her grandma and papa, especially papa because he babysits her Fridays so Mom and Grandma can go write at the cafe for the day. I love those sessions and we both get a lot done.

A: My laptop, exclusively. I don’t go anywhere without it and even have it down here in FL with me so I can do some writing.

A: I wrote my first book, longhand, in a large notebook I bought for the purpose and then we bought a Commodore 64. I had to get used to the keyboard but now use it exclusively.

A: My daughter said to say Han. Is this a Star Wars thing or what? If so, Han Solo was a dude and a half.

2 Responses to Interview with Cynthia Racette