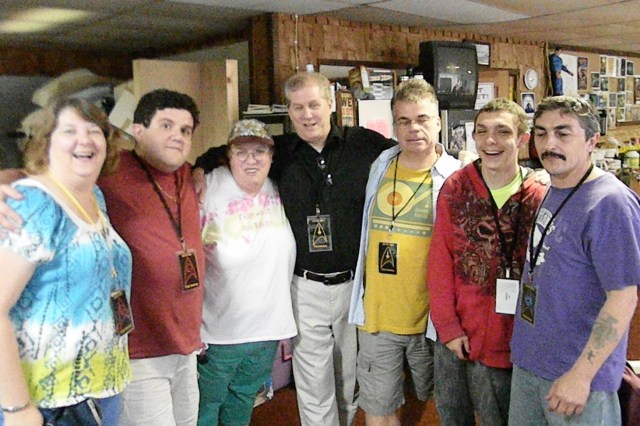 Me in the green room with a bunch of the cast and crew. I grabbed whomever was in reach and said “I need a picture to share” lol! We deliberately avoided sharing pics of cast in costume at this point because spoilers are always a big issue.

Phamily: The close-knit group formed among those working together to produce Star Trek Phase II

For my ROW80 Update, scroll to the bottom.

It’s that time of year. Every June-ish Star Trek Phase II shoots an episode of classic Trek over in Port Henry New York, just over an hour from our house. Since 2007, my hubby and I have participated in these shoots whether we go for the entire time (about 2 weeks usually) or just a few days.

We call each other family. Some people think that means we’re a sweet and loving bunch who always gets along and ends each day singing Kumbaya around the bonfire.

Yes, we are a family.

We steal each others’ toys and blame the dog.

We argue over whom Mom and Dad likes best and who got the bigger piece of cake.

We blame each other for putting decaf in the regular coffee pot and vice-versa.

We put up with our weird uncle because we love him…even though he’s…well…weird. Really weird.

We forget our cousin’s boyfriend’s name even though they’ve been dating for three years and he’s now her fiance.

We bring up religion and politics over dinner even though we know it’s not going to end well.

We get mad. I mean, really mad. Then we get over it.

We play favorites with our siblings.

We get very territorial in the sandbox.

Some of us detest JJ Trek, some like it, and some have varying opinions somewhere in between.

Yes, we do have bonfires. But every time I’ve tried getting people to sing Kumbaya I’ve been shouted down.

I’ve actually tried to instigate a Star Wars vs Star Trek debate, but most of us like both. And superheroes. And Mythbusters. And although most won’t admit it, I suspect they also agree that Karl Urban is incredibly hot.

My writing goals for the week? On hold. This round I made my goal to submit something every week, however these next couple of weeks I will be busy editing a friend’s novels.