Posted on December 18, 2013 by AmyBeth Inverness 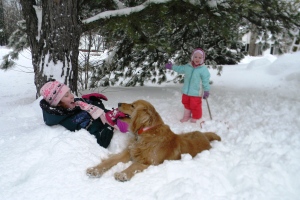 Playing in the snow a few years ago

Sometimes I think that guilt comes simply from the fact that I was born with a uterus. Not enough time for writing? Guilt. Spent time writing but didn’t get the laundry done? Guilt. Didn’t get the nativity display up on time? Guilt. Didn’t visit and comment on other blogs in the link-up? Guilt.

I honestly don’t think it is remotely possible to live my life without guilt.

Which is a problem… but…

Three years ago, when I asked my hubby if he would pitch in with more of the household stuff so I could do NaNoWriMo, his only request was that I “submit it somewhere” this time. Well, that first NaNoNovel wasn’t query-worthy. Not yet… it might work well as one of the books in the series if the others do well. But I did find an agent who would accept SciFi Romance with polyamorous themes. I followed the agency’s advice regarding building an internet presence and making connections in the writing community. I eventually submitted and published several short stories (all freebies) and just this month I sold my first piece. It’s a short story, and only a few dollars, but it still counts as my first sale.

Next on the list of goals is to publish a novel. There are sub-goals along the way… like finishing it (I will probably submit the one I’m working on now, which is just over 100k and will be about 120 when I finish) then polishing it (revising, editing, beta-readers…it’s a process) then submitting it.

Do I feel guilty about what I’ve done over the past three years?

There were more things I could have done with my kids. I’m an anti-helicopter parent, but still, I remember tearing myself away from my writing one day because the snow was in that rare state that is perfect for snowman-building and if I didn’t take advantage of it right away, we’d lose the opportunity. Then I felt guilty about not writing. And about not building an even bigger snowman. Or dressing the snowman better…he looked kinda scruffy. Then there’s the housework… oh, no… let’s just not go there…

I feel guilty about all those half-finished novels, or novels that I’ve outlined but not written. Five books in the Pangalactic Sojourners series, and Five books in the Victoria Pontifex series. A bunch of novels and shorts in the Kingdom Come series.

Having those stories on the shelf is not a bad thing.

For one thing, the very act of writing them made me a much, much better writer. I could go on at length about what I’ve learned about my own writing style and what works and what doesn’t. Even if some of these stories never see the light of day, they are part of my body of work and they helped shape me as an author.

They could see the light of day. One of the biggest hurdles for an author who has a successful first book is that gnarly second book… I have a second book at least in rough draft form whether my first book is KC, PS, or VP.

One idea that holds great appeal for me is to have several books ready for quick release. For example, having all five VP books ready and polished, then release them each one month apart. That means I’m doing a lot of work up front, but it also means that a lot of the promo I do can be combined.

That’s where I’m at right now. It’s the end of the year-end Round of Words in Eighty Days, and I met my goals even though I altered them somewhat.

And now I’m feeling guilty about spending so much time on my blog post instead of my WIP.

A writer by birth, a redhead by choice.
View all posts by AmyBeth Inverness →
This entry was posted in Commentary & Musing and tagged #ROW80, guilt, Kingdom Come, NaNoWriMo, polyamory. Bookmark the permalink.