Posted on January 8, 2014 by AmyBeth Inverness

Tuesday was a major milestone in my writing career.

I received monetary payment for a story I wrote!

Although I have several stories published in anthologies and a magazine, all the ones out there so far have been freebies. I’m immensely proud of all of them, and pleased as punch to have contributed to the projects. I plan to contribute again to those and similar projects regularly.

But this is the first time I have been paid for my writing. This is a huge milestone…I feel more professional now, somehow.

When the antho has a release date, I’ll share more about it. It’s SciFi, from a small press.

I finished my NaNoWriMo novel, which turned out to be two novels, 71,500 words and 84,500 words. I have set them aside as planned, because I must get my brain elsewhere before doing edits and revisions.

I went to my day-job today (teaching MS Excel and MS Access at VTC) to get ready for the new semester. Although my brain would much rather hang onto the stories and concentrate on nothing but, I do need to devote some brain power to teaching. Fortunately, not only have I done this many times before (since 2002) but it is also something I love doing.

I am almost done doing the edits I started for a friend pre-NaNo. He was very understanding about waiting not only through November, but through December as I finished my own writing before finishing his editing.

My brain decided to take a story off the shelf (Under The Radar) to work on next. Since the most recent novel turned into a set of two (and I could easily write a third…that’s the convenience of polyamory for a romance writer lol!) I decided to see how this story breaks down into separate novels. I think it’s good that my brain is still on the same planet as the other novels. I’ve remembered a few things about the world I want to emphasize, and a few things I want to change. This is why an author writes several novels in a world before publishing the first one…

Generally speaking, I need balance. I am committed to teaching this semester, but that doesn’t mean I have to give up my writing. And after the last two month’s marathon, my family misses me. I have the dirty laundry to prove it.

Goals for this round of ROW80:

Speaking of which, it’s almost 2AM, and I need to go to bed. 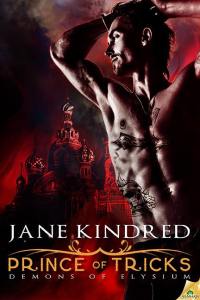 Jane Kindred‘s Prince of Tricks released on Tuesday! I already have my e-copy. Jane hosted a virtual release party on facebook, and I won some tea and…

Signed copies of her The House of Arkhangel’sk trilogy!

A writer by birth, a redhead by choice.
View all posts by AmyBeth Inverness →
This entry was posted in ROW80, Writing and tagged #ROW80, editing, Jane Kindred, NaNoWriMo, Prince of Tricks, writing. Bookmark the permalink.