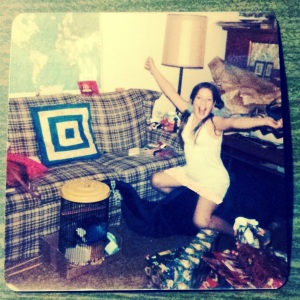 Me around age 12 with the giant Loch Ness Monster my mommy made. I named her Pressy, and she lived on my bed for many years.

When I was a kid, I wanted to be either a writer or an architect when I grew up. Being a very rational teenager (no…really…I was…) I chose architecture because writing was akin to being an actress. Only the best and luckiest get to make a living at it.

I was an excellent draftsperson in the 1980’s. I could accurately depict plans for machining and architecture, and my lettering was good enough to pass for machine-generated. Unfortunately, my timing was off. Computer Aided Drafting (CAD) was replacing hand drawing. By the time I finished my degree in 2005 (Yeah…I left school and then went back) the only hand drafting was done just “so students know the basics.” Most of my classmates, when we had to hand-draft something, did the design then traced it. I was competent in CAD, but just barely. I used my architecture degree to teach spreadsheets and databases to architecture students, and soon after 2005, hubby and I had a couple of kids.

But sometimes timing works in my favor. Ten years ago I wrote a children’s book aimed at middle grade and focused on Scottish Highland Dancing. It was good. I might go back to the series, using my other pseudonym AmyBeth Drumnadrochit. But it wasn’t time yet.

Ten years ago, there was no such thing as “social media,” or at least it was in its infant form.  E-publishing was rare and new. The big six still ruled the publishing world. My Highland Dance story was very niche, and didn’t have a chance. (I did query once, and was of course rejected.)

In 2010 I got serious about writing and getting published. I have several stories out now, and two more coming in the next month. This would not have happened just a few years earlier. It’s my social media connections and the ease of e-publishing that led to my publication.

So, it’s OK that teenage me decided not to be a writer.

It wasn’t time yet.

A writer by birth, a redhead by choice.
View all posts by AmyBeth Inverness →
This entry was posted in Commentary & Musing and tagged CAD, drafting, Drumnadrochit, Inverness, Loch Ness, Nessie, Pressy, social media. Bookmark the permalink.