Posted on August 7, 2014 by AmyBeth Inverness 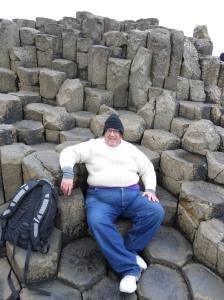 When not fighting a never-ending battle for truth, justice and good fan audio, Michael Liebmann lives a quiet life in Atlanta, Georgia.

There is no one definition of filk.  My version is “the folk music of the science fiction, fantasy and horror community”, except that it has gone beyond all those boundaries.  It’s gone from being parodies of songs on acoustic guitars mostly to rap, orchestral, choral, and not just parodies, but original stuff as well.

2)  How did you get started in filking? Is it addictive?

I ran into it in 1982 at a convention in Pasadena, CA, while on leave from the military.  Depending upon the person, yes, it can be addictive.

3)  Do you know all the words to Banned From Argo?

I have the words to it and approximately 100 of its children.  At last count, I think the total “illegitimate children of Argo” number somewhere around 300.  I have performed it, and co-wrote one of the children.

4)  What does GaFiA stand for?

Comfortably, except for the opening ceremony, where I used to put on a sport jacket and tie.  Since I sit in the dealers’ room all weekend, I’m in jeans and a colored t-shirt.

6)  What’s your favorite part of GaFilk?

I don’t know.  Since I miss most of it due to running the dealers’ room, it’s hard to say.  Probably the madness that is the Interfilk auction, especially when the bidding goes wild and the “Interfilk wenches” come out to try to get the bidders to up the bids.

7)  Is Southern Fried Filk a delicacy where you come from?

No.  It’s my small business.

8)  Does Talk Nerdy to Me count as filk?

Whether they artists who did it would say so, I would say yes, it would count as filk.

9)  What’s the most ridiculous argument you’ve ever heard between two filkers or SciFi fans?

Between 2 filkers: “what is filk” or “is it filk?”  Between 2 sci-fi fans, considering where sci-fi fandom has been over the last 50+ years, there are too many.  For instance, Star Trek fans were looked upon with derision originally.  Same with Star Wars, Space: 1999, the list goes on and on.

10)  Are there filkers all around the world?

Almost.  As far as I know, there are very few in Western Asia or in most of Africa (right now there are two in Swaziland, because one of them was assigned by the CDC to work there, and she took her husband with her).  We do have a sole filker in Singapore.  There are filkers in Israel.

11)  Are there any good filk songs about life on the moon?

Not that I know of.  The closest thing would be “Dancing on the Moon” by, I think, Diana Gallagher.

12)  What is your connection to Project Potemkin?

I do various guest voices for them.  I’ve been in, I think, 3 episodes.

Michael with Sean Paul Teeling and Grainne Ahern, both of Ireland, both of Star Trek Grissom.

13)  What other Star Trek productions have you been part of?

Starship Excelsior (where “we do the good work”), Star Trek: Helena (both in a voice capacity and in a behind the scenes capacity for one episode), Star Trek: Federatione One, both Star Treks Valkyrie, Star Trek Ranger, Star Trek Outpost, Star Trek Dimensions, Star Trek Neutral Zone, Star Trek Romulan Wars, I showed up now and then in the now-disappeared Star Trek Defiant through Pendant Productions, Star Trek Grissom (Ireland), Star Trek Mission of Mercy (I’m the voice in one of the trailers), Star Trek Osiris (episode 1, part 2, at the 47-minute mark), there are probably a few I’ve forgotten.

15)  Do your co-workers know about your filking habit?

Not specifically.  My boss doesn’t.  The other attorney knows I get together with people once a quarter now to sing the night away.

16)  What do you do on your days off, besides filking?

I’m trying to catch up with the books I’ve been purchasing over the last several years.  This summer, so far, I’ve read 4.5 books and am in a fifth.  I also go on Saturdays to farmers markets in the general Atlanta area to buy artisinal foods and locally-grown vegetables, fruit, eggs, etc.

17)  Do people ever confuse you with other Michael Liebmanns?

You did.  The funny thing is, I’ve only met one other Michael Liebmann in person in Belfast, Northern Ireland.  He’s a voice actor and an actor.

18)  What is the best use for chocolate-infused balsamic vinegar?

I don’t know yet.  However, my coconut-infused white balsamic vinegar went wonderfully on some locally-grown blueberries I had bought last month along with being a good mix with sliced tomato.  I’m hoping to try it with tomato and either mozarella or burrata cheese.  I’ve been told the chocolate will go well with chocolate ice cream.

19)  Have you been killed off yet in Game of Thrones?

I have never watched Game of Thrones due to the fact that it’s on a channel that is way too expensive to get here in Atlanta.  However, the Irish Michael Liebmann, who WAS in Game of Thrones, was killed off.  He was in one episode.

To quote Yul Brynner in The Ten Commandments, “Does it matter?”

A writer by birth, a redhead by choice.
View all posts by AmyBeth Inverness →
This entry was posted in Interviews and tagged Banned from Argo, filk, GaFia, Game of Thrones, Michael Liebmann. Bookmark the permalink.