In the In-Between Time

Posted on September 29, 2015 by AmyBeth Inverness

We’re in the in-between time when Round Three of ROW80 has ended and Round Four has not yet begun. It’s been a big week for me, with the release of Faceplanting is Always an Option, and the beginnings of NaNoWriMo prep. I’ve done a fair amount of writing, although yesterday in particular was dedicated to promo. I’m trying to ride that balance between doing enough promo to make my name and story visible, while not going all spammy on my friends and followers.

October is almost upon us, and I’m already prepping for NaNoWriMo. I had been ambivalent about which particular project I was going to use. I have an urban fantasy novella I want to write, but that would require me to fill out the word count either with a second novella or with a short story or two.

The deciding factor came when I looked through the photo gallery from the Springfield Steampunk Festival. I came across a photo of a young woman I’d met briefly, although I didn’t catch her name at the time. The image was perfect for the main character in one of my outlined Steampunk novels! I launched a search, beginning with the photographer, and found her in an amazingly short time thanks to the collective consciousness of social media. I have permission from both the photographer, Patrick Lennox Wright, and the model, Kassandra Bell to use the image to mock up a cover for Steamship Troopers. (If and when the story gets published, that’s a whole different situation.) 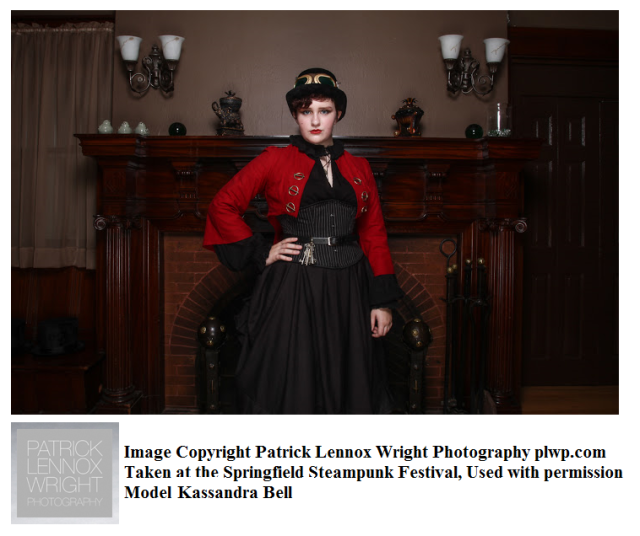 Thinking about what my ROW80 goals will be for next round… I’ll make a goals post next week.

In late November I’ll be doing a blog tour to promote The Cities of Luna. I’m very open to the kinds of posts I do… NaNo encouragement, interview, generic overview of the series, something funny…there are lots of possibilities. Is anyone willing to host me? I’m looking at starting on Black Friday, the day after Thanksgiving. (Friday November 27) I also have the goal of setting up all the various posts before November, so we don’t have to think too hard during NaNo.

A writer by birth, a redhead by choice.
View all posts by AmyBeth Inverness →
This entry was posted in ROW80, Writing and tagged #ROW80, blog tour, Patrick Lennox Wright, steampunk, urban fantasy. Bookmark the permalink.