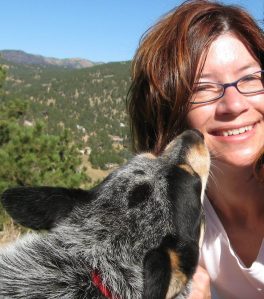 I’ve wanted to be a writer for as long as I can remember. We moved around a lot when I was little, so I can easily pin down my age based on where we lived, which means I was maybe six when I first made this proclamation. My writing has changed quite a bit over the years, although I am still proud of the short story I wrote in 8th grade about an orangutan named Inconspicuous (I was quite taken with that word).

My writing focuses on characters. I’ve created stories about ghosts, clones, monsters, escape artists, mermaids, circus performers…I’m all over the map. But in every single story I do my utmost to get into the minds and hearts of my characters. I love to put them in awful situations to see how they feel, and how they think. I want them to agonize over their choices, and I want what they choose – or don’t choose – to matter. I want the reader to feel joy when a character succeeds, and to cry when they don’t – just like I do when I’m writing the story.

Writing is far more fun and rewarding than any other job I’ve ever had, and I’ve been fortunate to have some good day jobs. None of them have ever had the appeal for me that writing does.

My ‘free’ time is spent in a futile quest to wear out my two herding dogs since I haven’t given in and gotten them their own herd of sheep.

I met Chuck Heintzelman, the founder of BundleRabbit, at a writing workshop in Oregon in February. One of the authors at the workshop, Leah Cutter, was curating the first bundle on BundleRabbit, and it sounded like a really neat idea. After watching the progress of Leah’s bundle, I decided to put one together myself. Most bundles are of book-length works, and since I only have the one novel out so far I thought: why not put together a bundle of short stories?

“The City Trees.”  This is a brand new story that I wrote for the bundle. It’s set in the same world as the series I’m working on – the first book is The Language of Water, and if all goes well I’ll finish that manuscript this fall and publish it in early 2017.

These stories are set in our contemporary world, with one twist – beings like naiads, dryads, witches, etc. are real, but ‘normal’ humans don’t know they are real. Imagine you’re a naiad living in our present-day world. Sure, you’d spend time hanging out in your pond or creek or whatever, but you might also like going out to the movies, or eating pizza.

In “The City Trees,” the protagonist is a dryad who moved to the big city, but the city trees won’t speak to her. She finds herself caught in the middle of the theft of something magical and powerful.

The story was awfully fun to write, and it helped me figure out a few things that I was going to need to address for the series, which was an extra bonus!

BundleRabbit is an eBook-bundling website. It’s similar to StoryBundle and Humble Bundle.

The bundle curator (organizer) invites authors to participate, puts together the graphics, sales copy, etc. A bundle is more like a boxed set than an anthology. Each author packages his/her own story, so the look & feel of each one is exactly how that author wants it to be.  Bundles are on sale for a limited time (this one is available through July 10th), and readers can choose to donate 10% of whatever they pay to charity.

That depends on whether I’m reading them or writing them. J

I generally prefer reading novel-length stories because if I like the world I want to stay in it for longer. That said, sometimes a short story is perfect just as it is.  One of my favorites is “The Rule of Names,” by Ursula K. Le Guin. It’s short and fun and wonderful.

I love writing short stories, but mine have a tendency to turn into novels. I have a long list of novels I’d like to write someday, and most of them began as short stories. My novel With Perfect Clarity, my soon-to-be-released novel Entangled by Midsummer, and the novel I’m planning on finishing in the fall all began as short stories. As an optimist, I try to look at this as a good thing. And since I’m also pragmatic, these days I usually put together at least a rough outline before starting a new short story.  That usually helps…

I sold a few flash pieces in 2003, then wrote sporadically for years. In 2010 I wrote absolutely nothing for the entire year. I seriously considered giving up writing entirely, then for some reason started to pay attention to the publishing world. That was around the time when self-publishing seemed to be heating up, and I thought: why not publish my first novel myself? I already had a full draft of the novel. So I signed up for a few writing workshops in Oregon, hired an editor and a cover designer, and slowly put everything together.

I have one main goal: to write full-time. It’s encouraging to see other writers make a living from their writing – to get there will take a long time, but that’s what I’m shooting for.

Specific goals are more transitory. For example, I have an in progress contemporary fantasy series, a bunch of notes on a western series I can’t wait to work on, and another fantasy series is in the very early planning stages. So that’s what I want to focus on in the short-term, but I’m sure I’ll add many more to the list before I’m done!

Oh wow. Where to start?  There are many, but I’ll name just a few.

I spent many years in a writing group with the very talented Richard E. Friesen. He’s begun publishing his epic fantasy series The Dreaming King Saga, which I’m very much looking forward to reading.

Grayson Towler is in my current critique group. The Dragon Waking, his first novel, will be out in August. This is a middle grade fantasy that includes both dragons and dinosaurs. Grayson’s non-middle grade fiction is just as spectacular.

And of course DeAnna Knippling, who you interviewed in 2013. J I met DeAnna at a writing workshop in Oregon a few years ago, and still think about one of the stories she wrote for that class. Her short story “Bad House Spirit” is in the Fantasy in the City bundle.

My computer is my favorite electronic writing tool, of course!  As far as software, I’m not sure I could pick one package. I use Word, Excel (I love spreadsheets!), OmniOutliner, Scapple, and my new favorite, TiddlyWiki.  I’m using TiddlyWiki to organize all the information I gather when I do research, so that’s definitely an important one. It’s really annoying to google something for a story and realize you read the same article while researching another story six months before.

My favorite non-electronic writing tools would have to be white pads of paper and pencils. When I’m trying to work out a plot point, or come up with a rough outline for a story, I will jot down words and draw circles and things that don’t mean anything to anyone else (and often don’t mean anything to me either a year later).

My house, but with a few renovations. J I can write when there’s noise, I prefer writing at home where it’s quiet and I have access to everything I might need – research books, snacks, and of course my dogs.

Don’t get too attached! J  Selkie lore implies that they’re very amorous, but that they don’t often fall in love.

As soon as possible!

Curating the story bundle took way more time than I expected it to, so I’m a little behind where I’d hoped to be. Right now it’s looking like it will probably come out in September.

…and a little Urban Fantasy from Lillie Lane…

3 Responses to Interview with Jamie Ferguson