Ready or Not, It’s a Wrap

My Wednesday writing updates are coordinated with A Round of Words in 80 Days, the writing challenge that knows you have a life. Eighty days is just under three months; we have four rounds a year.

Round two just came to a close.

Round three will begin in July.

This is a wonderfully supportive group that encourages me and helps me to set goals for my writing career. It’s very easy to let things slide or push certain tasks to the backburner if you don’t set specific goals. ROW80 has been instrumental in keeping me honest with myself about just what I’m accomplishing.

The big change that will come with Round Three is that I allowed myself to fall back on the writing in order to juggle everything that was involved with our move from Vermont to Colorado. 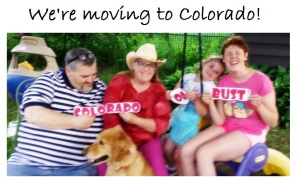 That move actually happened in February, in the middle of Round One, but it wasn’t that simple. Round Three is the end of the fallback.

I’ll spare you the details, but if you’re curious about the move you can read about the saga on my family blog.

Part of me is screaming “But…everything isn’t settled yet!” It’s true. Hubby’s still job hunting, there are services for my daughter’s special needs that are not yet in place, and I need to attend an orientation for UCCS where I’ll be finishing my bachelor’s degree in history this fall. (I have two associates’ degrees…I wished they added up to a bachelor’s, but alas, nope.) We’ve enrolled our younger daughter in a charter school (they are common here) and I want to make sure she is consistently getting everything she needs. Real life commitments are piled high.

July is Camp NaNoWriMo, which is a mini version of November’s event. I’m going to finish The Beekeeper’s Mother, an urban fantasy novella in three parts. I’m woefully unprepared… I need to finish beta reading for a friend, I have two short stories that I wanted to submit to specific markets in July, and I need to continue my regular schedule with The Cities of Luna . I haven’t re-read the part of the the story I’ve already finished. I haven’t looked at my notes about what comes next. The only meals I’ve made ahead and put in the freezer are a few meatloaves.

But it’s time. Next Wednesday my update post will include goals for Round Three, which will be much more substantial than Rounds One and Two. Ready or not, it’s time to wrap up all the loose ends and dive in with renewed strength and positivity.

I can do this!

Will a little encouragement from my friends.

A writer by birth, a redhead by choice.
View all posts by AmyBeth Inverness →
This entry was posted in NaNoWriMo, ROW80, Writing. Bookmark the permalink.