Ron Sparkman is a professional D.J. of 15 years who was inspired by the reboot of “Cosmos”, hosted by Neil deGrasse Tyson to become a science communicator. The show ignited a fire in Ron to make drastic changes in his life, transitioning from a life of all style and no substance, to one inspired by the scientific and cosmic world.

Ron is starting his 10 year journey to a PhD in astrophysics this fall and plans to tick off all the qualifications of being a NASA astronaut. His major goals include climbing the 7 summits of the world and being one of the 80,000 colonists Elon Musk plans to take to Mars.

1.      How would you characterize the first thirty-four years of your life?

Shew. That’s a hard one to pin down. Colorful. Expansive. Well-lived. I’ve been able to do so many things that most people never get to do and I feel honored in that way. But I’m only getting started. 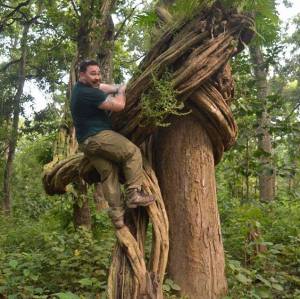 Chitwan National Park on the border of Nepal and India

Always been a geek for sure. Started young with the Transformers, G.I. Joe, and X-Men cartoons and just continued from there. Video games were a big thing for me; the perfect solace for my more tumultuous teen years. And I am still currently super geeky! I think it’s the best time to be one since “geek is chic” right now. The endless influx of new Comic and Sci-Fi movies is a beautiful thing. It’s a great time to be alive. 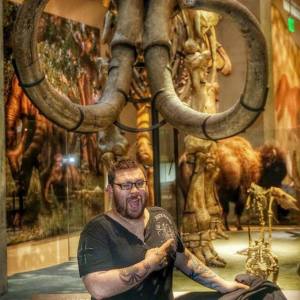 3.      What made you decide to make major changes in your life?

I don’t know that I really decided, but my impetus for change was the Neil deGrasse Tyson-helmed Cosmos reboot. After the 15 minutes, when he has explained at length the size of the observable universe and just how much was out there, I felt a shift in perception. The epiphany so many of hope for in life. It upended my entire life in a beautiful way. I’ve not stopped asking questions since. 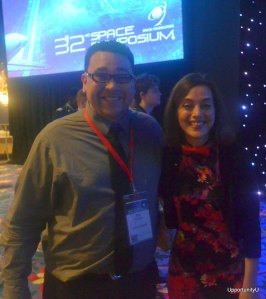 Sparkman and Dr. Amy Mainzer of JPL’s wise and neowise.

To be an effective science communicator like Dr. Tyson, Dr. Amy Mainzer, et al. To get a PhD. in astrophysics and work with the James Webb Telescope and its successor. And to be astronaut qualified via the qualifications NASA shared last fall which are: a 4 year degree in a STEM field, plus either 3 years in said field (or a Master’s degree in your field) or 1000 hours jet-engine training. My plan is to have all of those qualifications in 10 years.

In the end, the ultimate goal is to go to space. (I don’t care if it’s a suborbital flight or part of the 80,000 person settlement Elon Musk looks to have on Mars, I just want to be out there in it.) I want to inspire people to realize that they can be whatever they want to be, whatever their age, whatever they *think* their mental capabilities are. We can all be more and I think that should be our bigger goal. To elevate humanity and see the stars. I just want to make the world a better place before I leave it. 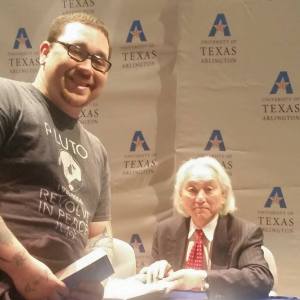 It’s definitely been a concerted effort the last few years. I mostly gave up my old life DJing and left a 6-figure career to basically start over as a poor college student. I started fighting all my fears. At 33, I didn’t have a driver’s license, I was scared of flying and heights, I was a high school dropout because of intense bullying, and more. Now, at 35, I’ve driven all over the country, I conquered my fear of flying through science (I read books on the physics of it), I flew into the scariest airport in the world and then trekked through some of the Himalaya mountains, I got my GED and I’m slated to start college in September. I volunteer at the Space Foundation, I run my own space and science website at UpportunityU.com, and I work hard on being as involved in possible in educating kids of all ages on everything STEM. Next year, I begin flying lessons. 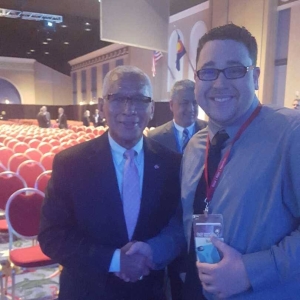 6.      How fit does one have to be to enter the astronaut program at NASA?

Very. If you get a chance to check out the website, NASA gives the qualifications for it. I led a pretty party heavy lifestyle through all of my 20’s and into my 30’s, so the biggest thing for me has been changing all of that. I rarely drink and have entirely changed my eating patterns. I’ve lost 40lbs this year by hitting the gym for short, intense workouts, eating 5-6 portioned meals a day consisting of complex carbs, lean proteins, and essential fats, and then I throw in a cheat meal or cheat day every week. 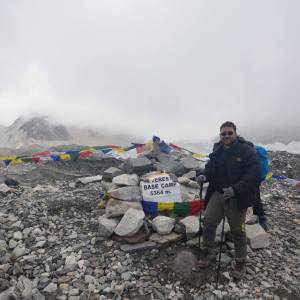 If you’ve ever read Body for LIFE, it’s very similar to that approach. To further push myself, I became a mountaineer. The training is so intense! I did the Everest Base Camp Trek last September and am currently planning on doing Aconcagua in January to celebrate my first semester of college. (I’m still in shock I’m ACTUALLY going back to college.) 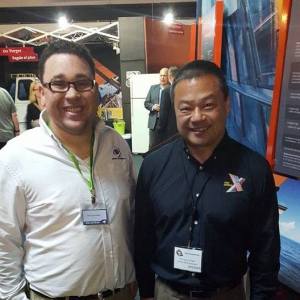 7.      How do you plan to fulfill the educational requirement for NASA?

A PhD. in astrophysics is my main goal. I want to work for NASA before I fly with NASA. New projects like the James Webb Telescope will tell more about the universe than even being on the surface of the Red Planet. But I don’t see why someone can’t strive for both.

8.      What else will you need to accomplish in order to enter the astronaut program?

Quite a few things. My age will be a factor so I want to hit all of the aforementioned qualifications NASA asks for in its candidates. I will also continue to improve my physical and mental fitness. I want to lose another 70lbs, continue to increase my understanding of the world, and to research as much as possible on personal development. Better ways to control my emotions and make rational decisions. To be able to see beyond a scary moment and figure out the answer to complex questions. I will also need to become more mechanically inclined. Flying lessons will be my first real dive into the waters of engineering and I’m excited to step outside of my comfort zone and learn all about it. I have a friend who inspired me to beat my fear of flying, Billy Michelson. He grew up with a father famous for flying, cleaning the airstrip on his family’s property. He’s been instrumental in my beating my fear of flying and educating myself on just what it takes. Flight is truly one of the most beautiful achievements for humanity. 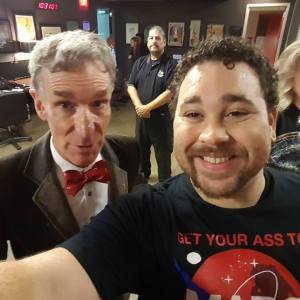 Yes, I have! I joined the Patreon group for StarTalk, Neil’s spaceand science podcast. And part of being a top-tier pledger is the ability to meet with the stars of the show like Neil, Bill Nye, David Grinspoon, Janna Levin, et al. It was one of the most amazing days of my life. I was so nervous to talk to him, that I just wrote him a letter just in case. I gave it to him, but I’m not sure if he ever read it. But I will say this. People say you should never meet your heroes. In this case, that is absolutely untrue. He was so passionate and kind and willing to open everyone in the room’s horizons. He is everyone’s best friend. He’s noted for saying that Carl Sagan inspired the kind of person he wanted to be. In my eyes, he’s achieved that. One of my other goals is to be on StarTalk as a guest someday. Fingers crossed. 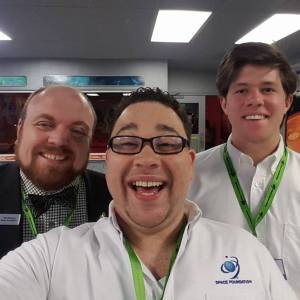 10.  What volunteer work do you do at The Space Foundation? Where can visitors find you there?

Shew, I do it all! I absolutely love being there. Space Foundation has everything from NOAA’s Science on a Sphere presentations, a large carbon fiber globe that has stunning images of celestial bodies–and just about anything else science-y we want to share–projected onto its surface. This allows us to utilize it in an interactive classroom format and give our guests a Cosmos-live style show. I love it. We have a robotics lab that’s styled as a Mars lab. A 3-D exhibit from DLR on Mars. A continually expanding space gallery featuring artifacts from the world’s space agencies. A plethora of revolving exhibitions of all kinds like MathAlive and our current one, Super Kids Save The World. We even have a VR app called Cosmic Cruise that I was lucky enough to narrate with the Director of Space Foundation’s Discovery Center, Travis Schenck. Another one of my goals (I have quite a few) is to work there full-time someday. I love everything I get to do there and all of the people I get to work with. And there’s nothing better than seeing the smiling faces of kids who have the same crazy dream that I have…to go to space someday. 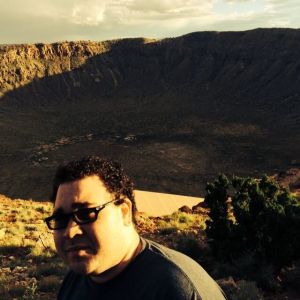 Science in the Wild is an idea created by the brilliant Dr. Ulyana Horodyskyj.  The group aspires to take people from all backgrounds and then get them involved in science in some of the most extreme environments in the world.

I was introduced to her through my friend who inspired me to do the EBC trek. “Dr. Skittles”, as she has been so lovingly nicknamed, wants to educate the indigenous peoples of these far-flung high-altitude paradises and she does that through her scientist-sherpa initiative. Everyone on the expedition gets to learn about the science of what her team is doing and be part of the projects she’s working on such as helping to combat climate change. I’ve also bugged Ulyana about joining her team when I’m a qualified astronomer. I’d love to drag telescopes up the world’s tallest mountains to experience high-altitude, crystal-clear, freezing cold skies, completely devoid of light pollution. Pretty much the most amazing conditions possible for a starnut.

Chitwan National Park on the border of Nepal and India

The next major expedition is to Aconcagua in January 2017. Check out the website and feel free to join the crew! It’s going to be incredible.

Both! I see humanity as a space-faring society someday, very similar to Roddenberry’s ideas. Elon Musk and Jeff Bezos are on track to make these sorts of huge visions for humanity a reality. At the very least, I want to be in the room when they happen. But obviously, I’d like to experience them first-hand. 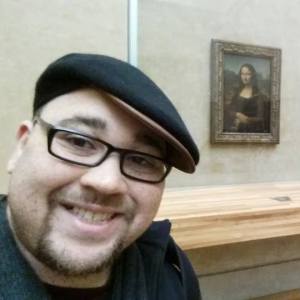 Han walked away with the win on this one, no matter who shot first. 🙂 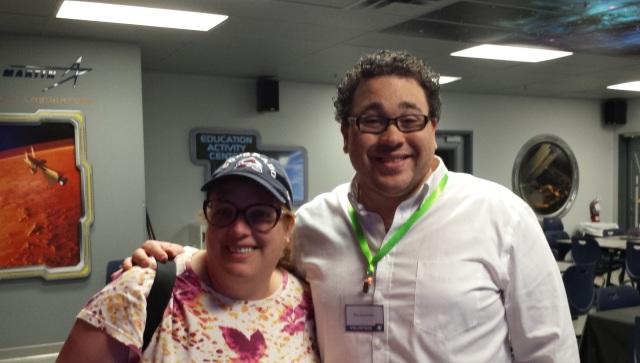 Ron and AB at the Space Foundation in Colorado Springs

1 Response to Interview with Ron Sparkman