Posted on September 1, 2016 by AmyBeth Inverness

Matt Bille is an author in Colorado Springs, Colorado.

He is also a naturalist, historian, science writer, and defense consultant.  A former Air Force officer, he is the author of over 20 technical publications and articles on space-related topics. He is the lead author of the NASA-published history The First Space Race: Launching the World’s First Satellites (2004), a groundbreaking account of the early Space Age. He wrote two books on the world’s rarest and least-known animals, Rumors of Existence (1995) and Shadows of Existence (2004), and is working on his third, tentatively titled Seas, Sharks, and Serpents. He has been a freelance contributor to reference books including Grzimek’s Animal Life Encyclopedia and the Nature Yearbook of Science & Technology. He is a member of the National Association of Science Writers and is a member of the History Committee of the American Astronautical Society.  He appeared on two television programs on mystery animals and blogs on the latest science and technology news at Matt’s Sci/Tech Blog.

1.      Have you ever been inside NORAD? Is it true there is a secret tunnel connecting the facility to the giraffe enclosure at Cheyenne Mountain Zoo?

I’ve not been there, but why the heck would you build a tunnel to the giraffe enclosure? Some kind of experiments to create a monster killer giraffe?

2.      How much of your writing is about science and space?

About half the nonfiction is about is space. The other half is on zoology and cryptozoology.  Most of my time these days is spent on novels.

3.      What memories do you have of the Apollo Missions?

4.      The word “dolmen” makes me think of monsters, but the word describes a certain type of ancient structure. What inspired you to use this as the center of a murder mystery?

I was thinking about what had NOT been done in horror fiction.  I’d come across mentions of dolmens in my general reading on history and folklore, and how they were supposed to be haunted.  The next question was, what haunted them? The connection between this type of creature and dolmens is a little vague, but it exists.

Matt and AmyBeth being attacked by a giant sloth at the Dinosaur Resource Center in Woodland Park CO.

5.      Besides being an author, you are also a naturalist, historian, science writer, and defense consultant. How much of your career came about through deliberate planning?

Not much.  I was an Air Force officer and I hit a point where my career wasn’t progressing, so I looked in the private sector and found a consulting position.  I originally wanted to write nonfiction, then fiction, then nonfiction… and a nonfiction book was the first one that sold.

6.      Of course, I want Nessie to be real, but although I love her I have to admit there probably isn’t a plesiosaur in Loch Ness. What kind of creature might we find there?

I don’t think we will find anything. I WANT to find something, but decade after decade passes and the evidence doesn’t get better. If there still IS a creature, perhaps it’s the huge thick-bodied eel Dr. Roy Mackal postulated. 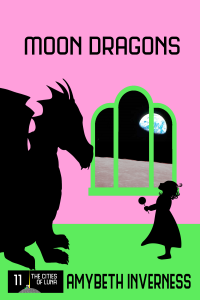 I probably should have asked Matt whether it’s plausible to find dragons on the moon…those wings aren’t for flight, they’re for air circulation. Flatulence, you know.

7.      Of all the cryptozoological subjects you’ve studied, which creature is most likely to live up to the legends?

The orang pendek of Sumatra, and ape like a large upright gibbon (which may be exactly what it is)  seems very real and is, I think, just one chance meeting away from being discovered and described.  I think there’s a “monster” in Alaska’s Lake Iliamna – probably not a new species, but perhaps a population of sturgeon that got in there long ago and tend to large size.

Hard to pick! Lake Heuvelmans was wonderful.  The one about the inbred family was the most terrifying.  Flukeman was a GREAT creature episode, as was the recent “Mulder and Scully Meet the Were-Monster.”

I write mainly in MS Word. I have big hands and need a full-size ergonomic keyboard.  I still write out a lot of thoughts in pen as they occur to me.

A little study crammed with books and silence.

I’m currently pushing Apex Predator, a Michael Crichton-style thriller.  Call is “Jaws meets Jurassic Park in Alaska,” although I like to think the characters elevate it above most novels in that genre.  I have about three other novels in revision, submission, or development at any time.

12.  What Colorado writers (besides me, of course) do you think more readers should discover?

Not to toot my agent’s horn, but Cicily Janus’ book on Jazz is interesting even to non-musicians like myself.  Chris Mandeville’s recent novel SEEDS is a great dystopian thriller.

Do you have any idea how hard it is to look like a professional author when there’s a huge dinosaur breathing down your neck?
I had a FANTASTIC time with Matt at the Dinosaur Resource Center!

A writer by birth, a redhead by choice.
View all posts by AmyBeth Inverness →
This entry was posted in Interviews and tagged Apollo, cryptozoology, dolmen, giant eagles, Nessie, orang pendek, The First Space Race, X Files, zoology. Bookmark the permalink.