Posted on November 15, 2017 by AmyBeth Inverness 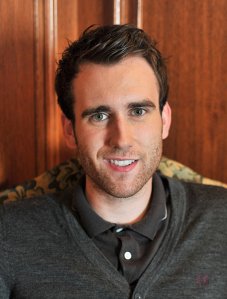 I wrote last week about writing an ensemble cast in a SciFi setting. It’s going well so far. I have eight major characters (it’s arranged-marriage-polyamory) and I began by letting half of them have a POV. I eventually let each of the others have a POV chapter, and there is one who is very deliberate remaining somewhat mysterious who does not yet have a POV.

In October I selected images of actors to use as character inspiration. I began with Matthew Lewis, best known for playing Neville Longbottom in the Harry Potter Movies. At age twenty-eight he has transitioned from the quiet nerdy adolescent character to playing gritter roles such as Sgt. Drum Drummond on Ripper Street.

And he’s absolutely gorgeous. (Check out this article in the Huffington Post.)

When I chose the eight actors, I made an effort to have a racially-diverse cast. Priyanka Chopra. Jordan Fisher. Kate Micucci. Grant O’Rourke. Zendaya. Godfrey Gao. Emilia Clarke. Ideally, for a human-colonized planet a couple thousand years in the future, every single one of the images should be of someone whose ethnicity is so mixed that one could not look at them and slap a label of “Asian” or “Hispanic” or such on any of them. If I’d worked a little harder at my selection, I could have found eight actors with bi- (or tri or quad or beyond) -racial characteristics, but the eight I used each have something I liked. I also didn’t want to put too much time into the project. I might fantasize about selling the film rights to my story someday, but if that ever happened it is highly unlikely that any of my original choices would be able to play the part for which their image was inspiration.

I’d love to get Matthew Lewis, though…

After I’d selected the eight, I was somewhat disgusted with myself. It felt like I had the token Asian, the token Hispanic, and one guy who could pass as black or biracial and I didn’t want to think too hard about it because that pondering in itself felt racist. But having the “token” ethnicities was better than whitewashing the whole thing.

Some characters were clearer in my mind than others. As I began to write, some of them began to speak to me, developing into fully fledged participants in the plot. The one character I mentioned who was still somewhat mysterious happened to be Godfrey Gao, AKA the token Asian.

This story is set on a future world. There is nothing that a twenty-first-century reader would notice about the character as being inherently Asian. Yet, as my brain started to explore what kind of guy this character was, I found myself coming up with racially stereotypical characteristics such as being a martial arts master or secret ninja.

Actually… I’ve already established that Zendaya’s character thinks of herself as ninja-like, but she’s not that good at it. (It’s okay. It’s not an important job skill.)

These thoughts bounced around in my head a while before I suddenly realized “Hey! That’s racist.” It’s not necessarily a negative stereotype to make the Asian guy a martial artist, but it is still racist.

The outstanding characteristics of Godfrey Gao’s character in my NaNoWriMo story are that he writes about law, and he is hard to get to know. He is the kind of person who will talk to anyone in a friendly manner, coming across as open and considerate, but after the conversation closes you realize he revealed absolutely nothing about himself while learning a great deal about you.

I’m seventeen thousand words in (behind, but not hopeless) and the other seven characters are well aware he exists, and that they will soon be married to him, but no one has as yet met him. Grant’s and Kate’s characters passed him in a hallway of the duchy offices, but didn’t realize who he was until he’d walked right past them. I’m setting up his introduction to be guarded and private. He will eventually get a POV, and I’m hoping when that happens the reader will have an “aha” moment.

I’m not going to worry too much about these images for now. I am generally sparse with regards to describing my characters’ physical characteristics anyway. That might not be a bad thing. I’ll keep the pictures in front of me, but the characters will show up in the story as a fully-fleshed people whose personalities and quirks have nothing to do with their far-away Earth ethnicity.

A writer by birth, a redhead by choice.
View all posts by AmyBeth Inverness →
This entry was posted in NaNoWriMo, ROW80, Writing and tagged biracial, character inspiration, ninjas, racism. Bookmark the permalink.