Posted on January 4, 2018 by AmyBeth Inverness 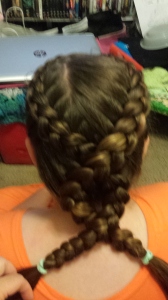 As a teenager in the 80’s I was jealous of the girls who spent an hour or more every morning making their hair perfectly floofy and feathered from all angles. Not jealous enough to spend that much time on my own hair, but I did admire the result. I put foam curlers in my hair every night, then brushed  up and back every morning. It was simple, and produced the desired result.

It’s fun to dress up and be fancy now and again, but my daily norm is no makeup and a simple hairstyle. It’s not worth the time and trouble to do anything complicated. The only exception is that I often put a french braid in my 10yo’s hair, and we don’t do that every day.

I’ll be 47 later this month. Solidly into middle age! Now, unfortunately, I have to take the time to do many necessary things that have nothing to do with aesthetics and everything to do with aging. I’ll spare you the details, but I swear that whatever the neti pot dislodged the other day could have gained sentience.

It’s not always easy to decide what’s worth my time and effort. Most of the time, my daughter likes having her hair done up. She just hates how much time it takes. I think it’s worth it not just because it’s cute and keeps her hair neat all day, but I also enjoy the mother-daughter time.

I’m enrolled in college this spring. I have two girls, the older of whom has special needs and is transitioning to adulthood. There are a lot of demands on my time. I started several stories in 2017, and I want to finish them. I also have a number of stories on the shelf I’d like to delve back into.

I need to decide what’s worth my time. My NaNo novel Coward of the County is just over 50k, but unfinished. It’s part of a series that I’m not likely to query soon. Twenty-first Century Airship Princess has great potential, but requires some re-arranging along with a rewrite of the unfinished rough draft. Techspectations and Mother of Dragons could be novellas, shorter and easier to finish.

They’re all worth my time.

A writer by birth, a redhead by choice.
View all posts by AmyBeth Inverness →
This entry was posted in ROW80, Writing and tagged braid, decisions, time management. Bookmark the permalink.

1 Response to What’s Worth It