Kat Brauer is a writer of speculative YA and romance, and recently signed with Sara Megibow of Nelson Literary Agency. She writes, reads, bakes, takes photos, and the list of talents grows too long for a short bio! Currently, she lives on a beautiful island in Nagasaki prefecture, Japan, where she battles the forces of Engrish by teaching English to elementary- and middle school students. Until July of 2011, her life is being consumed by Crits for Water, a campaign to raise $5,000 for charity: water.

Sub-genres: Of both, speculative–more specifically futuristic and fantasy. I like dragons and robots.

HOLY CRAP THOSE THINGS SHOULD GO TOGETHER.

2.       Have you always considered yourself to be a writer, or was there a time in your life when you decided that is what you were?

Honestly, I consider myself a strange writer-creature. Up until my sophomore/junior year in college, writing was a hobby. Being a lifelong reader, I knew that stories have power. But typing The End on that first book, I understood that I have that power, too. Though that power requires leveling up/XP points to be effective.

That being said, writing is not my sole professional dream. I’m a bit crazy in that I want to keep a day job–something that will pay me to travel and study languages and be patriotic ::cough::foreignservice::cough::.

3.       I love the fact that you described the “First Books That Are Shoved in a Drawer Never to See the Light of Day!”  When writing these books, did you have a goal in mind?

My first-first book I wrote for my sister. She gave me the idea and the motivation. I pantsed it and didn’t  think about publication until after the fact. Then I sent out wildly premature queries, got rejected, and started learning about the industry.

My second-first book I wrote for the craft. I thought I was writing it to get it published, but really, it taught me how the eff to write. That book was also the start of my Super Plotter transformation.

On the story level, I wrote these books to get two people together. They’re romance, so about two folks who can’t be together, but end up with a happily ever after anyway.

4.       What is your favorite electronic or digital writing tool?

Actual writing: pahaha, I use Word. And only Word. It is NOT a favorite. In fact, I curse at it regularly. Someday I might invest in Scrivener or a like tool, but probably only when Word explodes on me. (Don’t do it Word, PLEASE. Must back up files now.)

5.       What is your favorite non-electronic writing tool?

On the surface it’s mostly the same. I get critiqued by Agent Sara (of Awesome), I consider the notes, and then I figure out ways to implement them without affecting the main thrust of the story. Once I go on submissions, doubtless the feelings will
change more into ZOMG THIS IS MADNESS WAIT WAIT WAIT ZOMG MUST REFRESH EMAIL.

But underneath that surface it’s more of a, “Wow. This is a job. Like, a legitimate job. That is some CRAZY SHIZNITS.” My mind = blown.

More edits. Submitting to editors. Write new book (I iz plotting, and it makes me so happy!). Lather, rinse, repeat.

9.       “She bakes!”  Cheesecake, no less… has anything ever topped Tyler Florence’s Caramel Apple Cheesecake?

I have about a ka-zillion recipes, and I’ve started coming up with my own. It’s a great de-stressor, and so rewarding to give them to folks and make their day.

10.   “She takes photos!”  You have some gorgeous photos on your flikr stream. Where did this talent come from? Is it more than a hobby?

Photography is a hobby, definitely. I know my skill isn’t good enough to make it a job. But it’s FUN.

It started because of a summer work at Ritz Cameras before I studied abroad in China for a year. You can’t work at a camera shop and not get into it. And then I went to China and all the photo opportunities there and, well…now I’ve got five lenses, a flash, hefty filters, and the yearning to buy a full-frame body in the next year. 😀 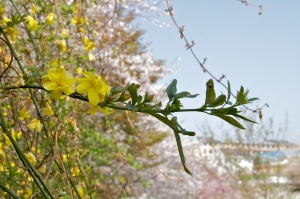 11.   Speaking of hobbies, every time I ask you, there seems to be more! Do you have a comprehensive list?

I think that’s comprehensive, but one never knows. There are lots of other things I like but don’t do consistently.

12.   Your blog is titled “The Flighty Temptress”.  How did you decide on that name?

The blog was originally a travel blog for my adventures in Japan. I’m addicted to Harry Potter, so the quote from Albus Dumbledore in book 6,

“And now Harry, let us step out into the night and pursue that flighty temptress, adventure”

felt perfect. The kanji on my header photo is Japanese for adventure. Now the blog has become more of a chronicling of my life adventures, so I feel it remains more than appropriate.

13.   Have you ever shared your Sailormoon or Harry Potter fan fiction?

Well, you can still view some of it on fanfiction.net. It’s terrible, just to warn you. But also terribly heartfelt. I’m searchable via the name “Koneko,” I think, if you have a particular urge to burn your eyeballs :D.

The Japanese Exchange and Teaching Programme. It’s run by the government of Japan, hiring then assigning foreigners to teach English. To apply you need to be a native English speaker and have a Bachelor’s degree.

Only downside–for some–is that once you’re hired, you don’t have a choice about where you’re placed in Japan. I’m in love with my epically rural island, but a lot of people go crazy without a city a hop-skip-jump away.

I live on an island between Kyushuu and Korea. It’s about 14km by 20km. Population of 30,000, and the majority of that is over 50. Most folks here are either fisherman, farmers, or in the service industry. The island is well known for its sushi, beef, and tobacco.

Also beaches. We have AMAZING beaches.

During the day, I teach elementary and middle school students how to pronounce “violin” or “very” and silly things like that. Also grammar, American history and culture, and Katy Perry songs.

16.   How did the earthquake and tsunami affect you and your community?

I live far from the epicenter and Tohoku, so the island wasn’t at all directly affected by the earthquake, tsunami, or nuclear reactors. However, many people on my island have relatives living in the area, so there has been a lot of concern and overall sympathy for their compatriots to the north. We’ve banded together and done a lot of fundraising and donations. It’s been quite uplifting, oddly enough.

Essentially, about 1 billion people on Earth don’t have access to clean water. That is, water that won’t give them infections diseases like cholera, dysentery, or hepatitis. Water affects everything we do–from growing food to going to school to getting jobs. So having safe water and good hygiene is one of the best ways to improve the quality of life in developing nations, send more children (especially girls) to school, and even improve the overall world economy.

18.   What is charity: water and how did you come to be involved with them? 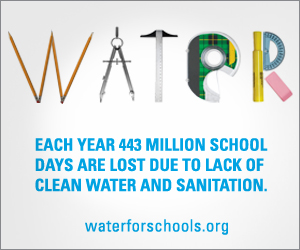 charity: water is a New York based charity that is dedicated to providing access to clean water and also supporting hygiene education. They fundraise and find partners in the field to drill wells or build water projects. The best part is that 100% of public donations go directly to the field. I think that’s awesome because I know exactly where my money is going.

I found out about them via a blog ages ago (http://spreadchange.blogspot.com/2009/02/charity-water.html). I liked it because a mere $20–four lattes, two movie tickets, one DVD–can make such a huge difference. Twenty dollars saves a life. I donated, learned more, and then got a little addicted.

I want to raise $5000, which is the average amount to build a water project that can provide a community with access to clean water. And, because the writing community is full of awesome and has done so much for me (like being my friends!), I thought: wouldn’t it be nice to help other writers, too?

So I said, okay, if someone donates $1, I’ll crit 250 words. And because I have such a lofty goal, I figured I’d need some help. I found Special Guest Critters–agents, other authors, and editors. And so far we’re well on our way. I could not be more amazed and awed at everyone’s generosity.

20.   Who has been and will be participating in Crits for Water with you? How did they get involved?

You can view all the participants here (http://theflightytemptress.wordpress.com/crits-for-water-schedule/). So far, the mysterious Editorial Anonymous; agents Ann Behar and Marisia Corvisiero; authors Jodi Meadows and the Rejectionist have offered up crits, to name a few.

Highlights to come: agent Jo Volpe and my Super Agent Sara Megibow; some of my favorite authors–Courtney Milan, Ashley March, and Susan Dennard. The ladies of Let the Words Flow. And editors like Meghan Conrad (Ellora’s Cave), Liz Pelletier, and Ranty
Editor.

And nothing ever would have happened without my crit partners, Jess Lei, Susan Dennard, and Ashley March. They encouraged me to do this, helped me approach some of the contributors, and spread the word. Those three aren’t just writer-friends, but the best friends I couldn’t have even asked for. I am epically blessed.

And now that I’m so teary-eyed, I think I’ll be done.

Shortlink for this interview: http://wp.me/p1qnT4-7f

A writer by birth, a redhead by choice.
View all posts by AmyBeth Inverness →
This entry was posted in Interviews, Writing. Bookmark the permalink.

4 Responses to Interview With Kat Brauer