SciFi Q of the Day: Religion in Science Fiction

Posted on February 7, 2012 by AmyBeth Inverness 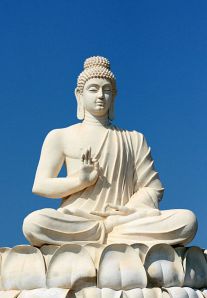 SciFi Question of the Day: In the SciFi you’ve read and watched, what role does religion play? Is it treated as a quaint, backwards practice or as an integral aspect of an enlightened future?

Didva Zachariel Ruthk religion is usually a reason for aggression or a tool for subjugation.

Janine Gorell I thought Gene Roddenberry and Rod Serling interposed moral/ethical dilemmas perhaps due to their religious background which I share and recognized, which made watching, for me, less scary.

Gwendolyn Wilkins ‎”Crash Landing on Iduna” was probably the most religious sci-fi I’ve ever read (at least that comes to mind).

Asimov and Anne McCaffrey tended to avoid religion and they’re the bulk of my scholarly repertoire.

I actually enjoyed the concept of the Children of the Mind of Christ in the Speaker for the Dead series branch-off of Orson Scott Card’s Ender’s Game.

Janine Gorell Farenheit 451 was supposedly based on a hyperbole of book burning by the Nazi’s and what would happen if the Nazi’s were successful at banning independent thought and putting propoganda in its place. Does your question contemplate that?

Janine Gorell So, in the case of Farenheit 451 a world without religion would be a hellish place.

Cayla Ray A lot of sci-fi seems to ignore religion in the human characters, but does go into descriptions of alien religions. I think this may be because it is safer not to alienate fanbase by portraying their religions in certain ways, but correlaries can be drawn more neutrally in the ‘alien’ rules and rituals of religion.

Daniel Beard I am reminded of the basis of religion in Heinlein’s “Stranger in a Strange Land”. “Thou art god”. nothing more, nothing less

Daniel Beard I am also reminded that Heinlein and Hubbard had a bet going as to which could create an actual religion base on one of their books. Hubbard won.

Rebecca Blain  –  Honestly, I can’t think of a single SciFi i have read recently that has included religion at all. It has all been politics.

Jenn Thorson  –  All I can think of is Logan’s Run. There, their beliefs about being reborn are killing everyone over, what 19? I wouldn’t say that fits in either the quaint or enlightened categories.

Does “the force” in Star Wars count?

Rebecca Blain  –  +AmyBeth Inverness I don’t view the force as a religion. It is a force, a power, just like magic is a tool used by sorcerers. I don’t view sorcery as religion, and the force is just a magic or tool used by jedi and sith imho. Jedi and sith, also, come across as politic groups in their general approach. They don’t worship anything.

AmyBeth Inverness   –  +Jenn Thorson First, thank you for the perfect example of the correct use of there and their. I’d call the Logan’s Run practice barbaric… an example of an atrocity performed for reasons that no longer exist, for the sake of religion.

+Rebecca Blain I agree. The Force really isn’t a religion, although within the story line itself at some point a character (Luke’s Uncle?? I don’t remember.) refers to the Jedi as a religious group…

Jennifer R. Povey  –  I’ve noticed a tendency for science fiction writers to actively avoid religion. Some writers do claim that we outgrow it. Star Trek shows non-human religions, but not human ones.
One obvious notable exception: New BSG…which messed with religion, but not, sadly, in a particularly coherent or useful way. Too many ‘wtf happened theres’.A trope we sometimes see is science taking the place of religion…Neal Stephenson’s Anathem comes to mind.The more I think of it, the more I think it’s ‘standard practice’ to leave religion out unless it’s important to the story. I do see it used a lot more in short stories than in longer works.

Rebecca Blain  –  +AmyBeth Inverness I guess to some, politics is religion :3

JoJo Zawawi  –  Not all religions include worship. Nevertheless, they deal with man as a spiritual being and are therefore religions by definition. A religion does not need to include worship in order to be a religion.

To answer your original question, I have seen religion dealt with, in Sci Fi, in numerous ways. One can create a story any old way one wants to ! 😀

Sam Webb  –  Weber touches on it a bit in the Honor Harrington series. Now I’m reading his Safehold series and the use/misuse of religion is an integral part of the story.

Jenn Thorson  –  Ha, you’re welcome– happy homonyms to you. 🙂 (PS- I recently committed an atrocity on “shoot” instead of “chute.” When I found it, I wanted to shoot myself and send myself down the chute. 🙂

Mercerism is an integral part of the theme and the plot. PKD was likely off the deep end by the time he wrote VALIS (which is even more religion-based), but he probably did more with religion and religious themes than any other SF writer I can think of. Transubstantiation in The Three Stigamta of Palmer Eldritch, The Transmigration of Timothy Archer, etc.

David Foster  –  ST: Deep Space 9 made a valient effort. It has often irked me religion is casually erased from society. There are some breif mentions in Ender’s Game, but that is nearly present day, so I don’t know if that counts. StarGate SG-1 had worship, but mainly of parasites with delusions of grandeur. BSG (classic and new) had some religion.

One of my favorites is a short story by Eric James Stone, called, That Leviathan Whom Thou Hast Made – it is religion that makes the story poingnant.

Jenn Thorson  –  On Firefly, they do have a chaplain.

AmyBeth Inverness  –  In my own writing, I usually include religion as a regular part of most, but not all character’s lives. It’s not overwhelming, it’s just another part of their very involved lives.

But one of my favorite stories is Nightfall by Silverberg & Asimov. Spoiler Alert the religion is purposely formed by those who know better because, post apocalypse, the masses of humanity need something to turn to, and a religious government would provide the necessary stability.

Jennifer R. Povey  –  Nightfall. Been forever since I read that story…I’d forgotten that detail. I’ve been reading a lot of Analogs lately and people are certainly not afraid to address religion, alien or human.

Simon Newby  –  +Jenn Thorson has my comment. Firefly definitely has Religion rubbing up alongside secularity as it does today in places such as the UK.

AmyBeth Inverness  –  In Firefly, they seem to have it around, but most of the crew isn’t sure what exactly to do with Book. Except for River, who cuts and pastes him Bible back together to “fix” it…

Simon Newby  –  Religion seems to be just getting on by in the general universe though. There are various denominations, people join if they feel the need, or not as they see fit. My ideal version of god personally.

The previous SciFi Q of the Day is Release the Kraken

The next SciFi Q of the Day is Why Go to the Moon?

8 Responses to SciFi Q of the Day: Religion in Science Fiction