Posted on September 21, 2012 by AmyBeth Inverness

Elsie the Giraffe is the mascot for the LiftPort Group. We are dedicated to unshackling humanity from the tyranny of gravity by building Elevators in Space.

We do some BIG science, but also have fun. We have comedy clips, music videos, and educational film at http://vimeo.com/channels/LiftPortal that we’ve gotten from lots of fans. We have fan art at http://facebook.com/LiftPortal. We do contests and LEGO robotics and educational programs with kids. We also have our regular http://youtube.com/ElevatorToSpace live feeds from experiments and will be developing a channel this fall or spring.

Our other mascot friends also have been named for systems with long and complicated names. Camilla the rubber chicken with the Solar Dynamics Observatory takes cool pictures of the sun. Spooner Etdpo is the monkey mascot from the former NASA Exploration Technology Development Program Office (ETDP). Thanks Alexandra Rubin and @AudreyDesigns for the nice pictures!  While most people think about Elsie the Borden’s Milk Cow, we’re no relation. Elsie is not the name of the Mrs. O’Leary’s cow that started the Chicago fire. (Smokey the Bear taught us good fire safety!)

2.    How would you explain what a space elevator is to my daughter’s 7th grade science class?

Hi Reva! and siblings! and friends! A future Earth’s Space Elevator would go from the earth to space. It’s purpose is to carry cargo as you need to bring many things with you when you go or find materials to make them there.

Maybe you’ve heard of carbon nanotubes. A Space Elevator might be made out of these because they are very strong. Scientists are working on this and will be able to create an elevator from it someday.

What we can do is put an Elevator on the Moon. It would be cheaper to get things on and off the moon without all the blast-off required by rockets. It would use a similar strong ribbon material that’s about the width of dental floss. Then we take a robot ‘Lifter’ that climbs up and down carrying things.

3.    Why is a space elevator better than shooting rockets into orbit?

Rocket fuel is expensive.  But it’s not fuel costs, that’s only about 10% (or less) of the expense.  It’s operations, and the ‘bigness’ of the kind of organization that can launch a rocket.  It’s loss of management oversight, lots and lots of layers of staffing, and safety make the price add up.  Also, 30% is JUST insuring the launch.  It’s also about the size, a rocket can’t hold very much but a Space Elevator can carry a lot of cargo. By building something that stays up in orbit they can keep moving cargo back and forth instead of the round trip of a rocket.

Well, mostly because the technology is not there yet for the Earth’s Space Elevator. Working on the Lunar Space Elevator will help us learn so that we will know how to create one.

5.    If we could get to Mars, could we build a space elevator there?

Yes, that would be great! We’re thinking up one called MarSE or Mars Space Elevator. One of the purposes of a space elevator is to make other Space Elevators. We could have a few of them that would help build a space station. From there, building any kind of base on the surface, where people could go, is easier.

6.    How can we get kids excited about science?

We love experiential learning with DIY do it yourself/ maker/ hacker communities and Science Fairs where folks get together to tinker on stuff. Anything that makes learning fun and something that they can participate in is a good idea in our book.

Gaming is a great place to start. Kids already like playing online games with their friends. The goal is to make the games more learning based. It’s kind of like mom putting extra vegetables in the lasagna so they didn’t even know they were getting it. We would love to build a game that teaches real science and also gives us information about ways to build things in space.

The robotic climber competition that the ISEC International Space Elevator Consortium does is great too. We also are working on getting good prizes together for experiments. Sure fame and glory are great, but fabulous prizes and money are even better!

LiftPortal is the ‘Portal’ to LiftPort, trying to make it even more accessible. We work more closely with our nonprofit partners under their 501c3 status. We are good friends with http://LeewardSpaceFoundation.org and http://ISEC.org International Space Elevator Consortium and do education for kids, students, the public, and industry professionals.

8.    What are the major differences between the space elevator in Arthur C. Clarke’s Fountains of Paradise and the very real Space Elevator LiftPort hopes to build someday?

That’s definitely one of the classics! Clarke’s Space Elevator was 23600 miles tall and 30 feet across. It was made of a material Diamonoid that doesn’t exist. It was tethered by an asteroid that actually might be dangerous if it fell.

The Space Elevator that LiftPort might envision would be made out of carbon nanotubes, that also is made from carbon. A real Space Elevator might be much smaller in size that the one Clarke thought up.

9.    Is it possible to have a good science fiction story if the science behind it is not plausible?

Yes, of course it’s better when it’s true. If the character development is good, I think you can still have a good story. I *love* those 50s campy sci-fi movies that did a lot of pretty impossible things. While the folks at Mystery Science Theater might laugh at them from the theater seats (even though there is *supposed* to be no talking in the theater), we still love those cheesy movies.

10.   What is your favorite example of Science Fiction leading science?

There are lots of good examples. The 1920s Metropolis from Fritz Lang, with the big silver robot Maria, had helicopters long before they were invented. Your basic smartphone can do most things like a Star Trek communicator or scanner. What’s hot right now is the buzz about Star Trek’s warp drive being plausible. http://t.co/GyJDxSin

11.   How and when was LiftPort founded, and for what purpose? Has that purpose changed?

LiftPort was founded in 2003 and did a lot of Space Elevator research and advanced technologies. It was focused on the Earth’s Space Elevator, but we’re now focusing on the shorter term goal of Tethered Tower balloon and robotics experiment that will lead to scientific discovery that will help the Lunar Space Elevator. We only use technology that we can use in space. Even if it would be easier to cheat with systems that work in our gravity and temperatures, instead of the low gravity and very cold temperatures.

12.   What is LiftPort’s relationship to NASA?

LiftPort developed after the 2001-3 NASA study. We don’t have any formal relationship, but we have friends that work there. Maybe someday we’ll be back on base drinking Tang and eating dehydrated strawberry ice cream again with our Astronaut friends.

13.   I’ve spoken to Michael Laine on the phone several times. Is he as brilliant in person as he seems?

YES! Michael is a delight to work with. He  has a great sense of humor. Don’t let the word get out but he really is a NICE guy! You might have seen him on the video channel and but he’s even more fun in person.

What does he do at LiftPort?

He talks a lot. To everyone. He pulls together all the pieces together and lets his staff shine.

He directs the Shoemaker’s elves (because the name of robot’s designers is David Shoemaker) who work on the robot. They are from all over the world. When it’s night here, it’s daytime for them. When the rest of the team wakes up, there’s new surprises with work they got done.

14.   According to LiftPort’s biography page, Michelle Cadieux is a technical writer and trainer, and an instructor in chemical,  structural engineering and nanotechnology. What does she do on the LiftPort team?

She writes alot. If Michael never stops talking, she never stops writing. She helps document all the plans into action items that can be shared with the team and the world.

We wanted to thank all the top notch scientists who make this all possible. It’s been put together with the help of a cast of thousands over the years.

I’m all thumbs, or actually no thumbs and all hooves, at drawing so we really appreciate having the great artists around.

And we wanted to thank the Academy, oh wait, wrong award. We were just practicing as we were nominated in the upcoming StayClassy.org nonprofit awards in San Diego. 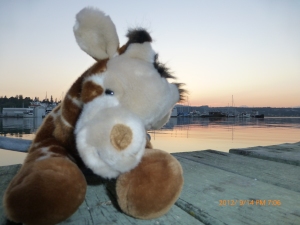 This is our very first interview! With never before seen exclusive pictures. It wasn’t even scary at all, even with all the people watching.

SpaceRaceKids is working on their show now. It will have a space elevator on it and we really hope that we get to come on. I told them to talk to my agent. 😉

17. What Do You Eat for Breakfast?

Giraffes in general eat leaves from acacia, mimosa, and wild apricot trees. They don’t let me eat sugar cereal as it’s bad for your teeth, but I do like the Giraffe on the box. Maybe someday I can be on a cereal box of my own!

18.   Do you and/or any of your colleagues identify with any of the characters on “The Big Bang Theory?”

Michael Laine is very much like Sheldon. Smart and serious with a side of Bazinga! Don’t tell Sheldon that he has a mad crush on Amy Farrah Fowler.

Michael and Michelle share the same office so like it’s a bit like Penny with Sheldon. They are constantly irritated by each other’s nerdy and obstinate personalities, but they are ultimately good friends.

They don’t let me watch much tv, it rots your brain. We do have a lot of loveable geeks on the team though, like that show.

19.   How did LiftPort end up on “16 Kickstarter projects that could destroy civilization?”

It was a dark and stormy night. We were sitting home, petting the white cat, plotting world domination with our sharks with lasers…..

Hey, wait a minute! That was a trick question! We’re not evil overlords and actually very well mannered.

We don’t know how we got on the list and at number one! They are expecting a big metal sculpture that is going to fall on the earth, but that wouldn’t happen as it would burn up. The project we’re working on for the Lunar Elevator uses a ribbon the size of dental floss. Doesn’t sound too dangerous does it?

Our friends ArduSat with the programmable satellite also made the list. They work with TeamPrometheus.org, a model rocket and education group.

Ooooh, we like Star Wars! Well, we try not to meddle in interplanetary trade wars and hearsay about who started bar fights. We leave that to the Zeno Ambassadors. That shooting business is so messy and we wish they would all just behave and play nice with other with Marshmallow shooting guns instead.

Micheal says that Han Shot first!, but you’ll have to wait until he has time to finish answering his questions to hear about that.

I also wrote a short story called Jack’s Beanstalk inspired by the Space Elevator. It’s just under 3,000 words and would probably be rated PG13. No sexual content, just a little violence.