Posted on February 16, 2013 by AmyBeth Inverness 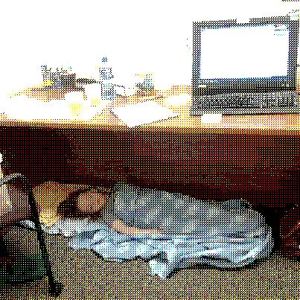 Last night I decided that I would go into work today. It’s Spring Break so there are no students around, which means I would have a blissfully peaceful environment to work in. My 5yo loves coming in to work with Mommy and Daddy (Hubby’s in IT, I teach part time) and she even has a nap sack that we put under the desk so she can sleep while I work.

Last night she kept waking up. She had bad dreams. Of course, every time she woke up, so did I. By morning, I was miserable, and on top of the tiredness I felt sick to my stomach.

Fortunately, I have a wonderful husband who volunteered to take the kids to school so I could sleep some more. He even took an early lunch so he could pick up our 5yo from Pre-School and ask whether I felt like coming in yet.

I still felt like crap. I didn’t go into work. I did take care of the 5yo though, who (thankfully) is quite an angel and played quietly on the computer until naptime.

A few years from now, I hope to have a real writing career with deadlines and contracts and commitments. This means I’ll have to juggle career with family, which is an old story. I already do that to some extent with my teaching job. I only teach in the Spring, and I only teach one class. Yet there is homework to grade and preparation to do. I often find myself putting these things off, not due to procrastination, but to a thousand other important things that come up. It’s one thing to say “I just blew off the housework” but in reality, those dishes need to be washed eventually even if they sit in the sink for a couple of days. The laundry must be done because we can not walk around naked in the winter in Vermont, and I am attempting to teach my teenage daughter that digging dirty stuff out of the laundry basket is not acceptable.

I’ve seen the meme where women claim the word “bitch” to mean that they are strong and capable people. Personally, I do not think of myself as a bitch and I do not want to. I can be strong and capable without being domineering and rude. But in telling people “No, I can’t do that now, I have to (write, grade papers, whatever) now,” I often feel like I’m being a bitch. Sometimes people make me feel this way. They know that I have control over my time, and that I am able to do whatever it is they’re asking me to do if I just put aside the grading or the laundry or the writing.

Good golly Miss Molly this is hard. Too many times I’ve found myself grading homework the night before class. When I was proofreading, I’d find myself doing the bulk of the work right before the deadline. And I hate putting things off. I really do. I do not want “procrastinator” to be part of my identity. I like to be early, or at least on time.

It’s 1:00 in the morning now. This is actually when I get a lot of my best work done, especially the writing. Yet I do not function on little sleep, which means that I will be sleeping until at least 10 or so on Saturday morning. Although this goes against Dayna’s advice of getting up early, it’s what works for our family. We stagger our sleep schedules.

I’m going to my first writers conference in April. I am really looking forward to it! But one of my fears is that I’ll be pressured to stay up too late (I may be a nightowl, but when I need to get up early I go to bed early) which will lead me to being miserable during the day when I want to be awake and enjoy the conference activities. I don’t want to sound like a bitch when I tell people I’m going to skip the bar and go to bed.

I’d like some examples, please. I want to see more women in real life, television, movies and everything who balance their lives without resorting to being rude or domineering. On the other hand, I’d also like to see women be treated with respect when they organize their time in whatever way they see fit. Too often, if a woman stands up for herself, there is someone right there ready to stamp the label “BITCH” on her forehead. Sometimes I feel like I’m walking on eggshells waiting for this to happen.

Today I watched Emma Watson in The Perks of Being a Wallflower. This video seems appropriate.

A writer by birth, a redhead by choice.
View all posts by AmyBeth Inverness →
This entry was posted in Commentary & Musing and tagged bitch, comitments, Hermione, hubby, labels, sleep, The Perks of Being a Wallflower, writing career. Bookmark the permalink.