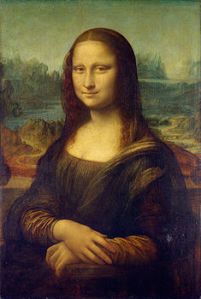 SciFi Question of the Day: Should world governments make a law that certain works of art and heritage should never be allowed to leave the planet? Or should colonists be able to take their (legally owned) art and heritage with them?

I posted this on May 11 and I was surprised at how vehement some of the answers were. I actually had to delete and repost one of the threads because the first response was incredibly rude and convo-killing. After that, all the threads produced some really well-thought out answers. Oh, and for those of you wondering, yes, this question beat out the Disco question and the Disney Classics Reimagined question for most engagetivity. Engagetudiness?

Oh… and the formatting? I fight WordPress over that every time I copy/paste from social media. After a certain point I say “That’s the best I can do…” and leave it alone.

Katherine Fixer Noel Ask the Native Americans and Egyptians about that one. The people with the most money and power will always be able to take what they want with them.

Kind of like the concept behind getting humans off-world to begin with of not keeping all of one’s eggs in one basket – kind of spreading things out and to other (potentially safe) locations.

Even “world heritage” pieces owned by museums and universities should enjoy the occasional trip off-world if the pieces are stable enough for transport so that colonists can enjoy these fine pieces on their own planet.

Dale Thelander Yes. The tv series Cavemen should NEVER be allowed to leave the planet!

AmyBeth Fredricksen Too late? Daniel… what did you do…?

Daniel Beard If it is a TV series, then it has been broadcast, and has left the planet. has it not?

Dale Thelander That’s a myth. Tv station signals are reliant on line-of-sight (even moreso since the digital transition). On the frequencies they’re on, and the transmitter power, it’s unlikely they’ve left the troposphere, let alone the solar system.

Mary Cain  I say if it’s privately and legally owned, they should be able to take it.  However, national treasures should stay within the nation.  You can’t take antiquities from their countries, so it’s the same concept.  What about museums though?  Art often go on museum tours… what if the next museum on the list was on a different planet?  As long as its promised to return, that should be okay, right?

Eoghann IrvingThere are currently laws in some countries that stop items which are considered to be national treasures from being taken out of the country for this reason.

It becomes a more complex issue though when you consider how accurate reproductions will be in a few decades time. Almost down to the atom in fact.

Dalt Wisney  You mean we can’t take the Elgin Marbles to Mars?

AmyBeth Inverness  How about the pyramids? They’d look awesome on Mars…

Brittany Constable  Depends on why they’re leaving the world, but I don’t see why it shouldn’t go. Plenty of our cultural treasures are housed in a different city or country than their origin. It would probably be best to make sure that travel is safe and stable before you pack up the priceless and irreplaceable stuff, but other than that, sure.

Gerri Lynn Baxter  Certain works, yes. Some works only make sense in the context of Earth, IMO, like Warhol pop art may not make sense after a generation. But works like the Mona Lisa, that art stands alone, and could go to an alien (i.e. not earth) world and still have impact.

Nigel Mitchell  Wow, what an interesting question. I think it’s a fair point. I imagine a future where each location in space has its own culture; Moon culture, asteroid culture, Saturn culture. And then someone protests the idea of taking the Mona Lisa onto a space station, because it “belongs to Earth.” Essentially a sort of cultural bigotry. It reminds me of the Greeks who want all of their ancient artwork returned to Greece, because it “belongs to Greece.” I smell a story idea…

Gerri Lynn Baxter  +Nigel Mitchell, one of the minor points in C. J. Cherryh’s Cyteen and Regenesis series is about art, how art keeps people connected to Earth when they live in hostile atmospheres, and how art kept space travellers sane, both by viewing and making art. She also talks about the value of art tho psychology of people who live in closed environments. Really helped round out the story. I recommend reading it.

AmyBeth Inverness  I absolutely must read those!

Oliver Clare  In only about 4 million years’ time, the Sun will begin to die. This death will involve expansion that will engulf Earth.

By then, humans will have either died out, or left Earth entirely (a shattered, barren wreck), with no backward glance.The preservation of 4 million years’-worth of art would be a fairly epic undertaking for any organisation. I’d hope they would start by culling Tracey Emins…

Gerri Lynn Baxter  +Oliver Clare, cough you’re off by a factor of b…. We’ve got about 5 billion years left on this star before it switches into death throes…

Bwandungi Mugarura  What about the art that is not owned by a single person? For example, the sculptural pieces from Egypt or the golden masks from Benin or the statues of Greece.

Once departure day arrives, who is responsible for making sure those are saved?On the other hand, with advancements in 3D printing (or technologies like it) maybe the originals will not be needed.

Nigel Mitchell  +Bwandungi Mugarura Well, even in today’s world where we can make reproductions of great work with scanners and digital media, the original is still prized. I don’t think anyone would accept allowing the original Mona Lisa to be destroyed, even if we had a thousand perfect copies.

Nigel Mitchell  +Gerri Lynn Baxter I have read Cyteen, and you’re right, the art factors well into it.

Oliver Clare  +Gerri Lynn Baxter In the immortal words of Detritus the troll… One, two, many… Lots…

Thaddeus Cochrane  Good question….but quite honestly, how could you stop them from leaving? When off world colonies get to the point where they want expensive art and such, the smuggling of pretty much everything will be rampant, and I doubt laws against it would keep famous works of art on the planet.

A piece of art’s primary value is the reflection of the process by which it was created, of the mind of the artist in the act of committing vision to canvas or marble or whatever media was handy and appropriate. To believe otherwise is both to flirt with idolatry and to invite the commoditization of art.

As time goes by, some pieces acquire historical, even archaeological value, but even there the connection with the moment and the craftsperson is what matters, not the object itself. We do not look at the Mona Lisa to see the woman, we look at the Mona Lisa to see into Leonardo’s mind, to share his artistic vision, if only for a fleeting instant.The idea of a piece of art is ultimately more lasting than any physical manifestation. You can take a chisel to Michelangelo’s Pieta, but you cannot destroy the frozen, serene sorrow it captures, not with ten million images of it embedded in the collective Western consciousness.

So where a piece physically rests matters not at all, except to collectors, curators and hucksters of culture. Only a tiny fraction of humanity will ever be in the physical presence of any given work of art anyway. As long as the idea is present, the art is everywhere it needs to be.

Zachary Besterfield  It would not be without historical precedent for a government to prohibit the export of certain works. But, art is forever. Governments are not.

Robert Niemi  My art should be able to go with me wherever I go. Figuratively and literally.

Robert Niemi  And anything I purchase. *within reasonable shipping parameters.

Lizka Vaintrob  There should be a date “limit”. Art that’s, say, over one hundred years old stays on its home planet, but if you take it before then, then it can go anywhere. Plus, planets should be able to lend their art to exhibitions, etc.

Ergodic Mage  I have to say yes. Exploitation of art has always been a huge problem.

Mackey Chandler  Then it works in reverse too I assume. A work of art make in orbit or on the moon can’t be sent to Earth.
Statists love to say what can be done with other’s private property.

Stephen Thompson  Eventually, in five billion years, the Mona Lisa, the Gutenberg Bible, the Statue of Liberty, etc, will have to be moved off planet or they will be forever destroyed.

Kalle Last  Only reason to forbid moving something off-planet would be if it can cause problems with the item (e.g it can’t survive the launch). Other than that I see absolutely no reason why to limit moving things around.

David Grigg  By the time we can make the trip, it will be possible to make absolutely perfect copies of any object, including any artwork. We’ll just send the digital files.

Kurt Copeland  Why impose this seemingly arbitrary limit (and a virtually un-enforcable one at that) about where media should be allowed?

Kalle Last  +Lizka Vaintrob lots of those countries have lost their stuff simply due to internal problems. Had the arts been taken away we’d still have them. It works both ways.

Kurt Copeland  +Lizka Vaintrob  A few potential flaws in your logic. As always, criminals don’t care about your laws. Restricting it from being viewed may make it even easier to steal since it is not on public display and, finally, we’ve had the technology to leave the planet since the 1960’s. I don’t see how one premise correlates with the other. Oh, and then there is that whole previously mentioned thing about being able to do what you want with your own private property. It seems we make laws to accommodate the criminals and hinder the public. Punish the criminals, not the people.

Clint Johnson  As a libertarian, I can only come down on the side of the owners. As crazy as it would be, if David Martinez decided to use Jackson Pollock’s No. 5, 1948 for fire starter… it was his $140 million, so it is his painting to do with as he choose.
(Although personally, I don’t see Pollock’s paintings as anything that couldn’t be replicated by tossing paint on a dog standing next to a canvas.)The whole concept of taking control of any artifacts for “common heritage” or “for the people” is simply Orwellian newspeak by the ruling class to justify their use of state force and expropriated money to gain a level of control over cultural artifacts that the most rapacious monarchies of the past could only dream of.

A writer by birth, a redhead by choice.
View all posts by AmyBeth Inverness →
This entry was posted in SciFi Q of the Day and tagged art, debate, heritage, Mona Lisa, Mona Lissa, national treasure, unenfocreable law, Who owns art?. Bookmark the permalink.

5 Responses to SciFi Question of the Day: Art Offworld