Posted on February 18, 2015 by AmyBeth Inverness

I’m being glitchy and twitchy with the WIP. It’s not so much that I’m having trouble getting into it, it’s that the story is bright in my mind in some pieces, and dark in blurry in others. I don’t like writing out-of-order, and so I’ve been getting stuck on the places where I don’t know exactly what the segue from D to E to F will be. Sometimes, I can write an individual scene ahead of time, then insert it into the story when I get there. Often, this ‘out-of-order’ scene ends up being deleted, as its details only need to be alluded to, not described in detail. It’s not a total waste, though. Writing it helped me focus what was going to happen in the story.

At the moment, I’m gathering ‘out-of-order’ scenes in my mind, and have refused to write them. I don’t want to have ten scenes that end up on the cutting-room floor from the get-go.

But I also don’t need to go three days in a row without writing much of anything.

This particular story is about the incorporeum, which means it ties together characters in vastly different time periods. I usually keep each time period moving in a linear fashion even though the incorporeum character moves back and forth through time. But I don’t necessarily need to do that…

Tonight I plan to dive into the ‘out-of-order’ scenes, and resign myself to an extensive rewrite for Revision 01 when the time comes. Then again… sometimes I discover that skipping ahead is the best way to tell a story. Actually, for one of my characters, skipping ahead would be very, very appropriate. Her story is more of life as a whole than about an important incident in her life.

And then there’s Elaine… 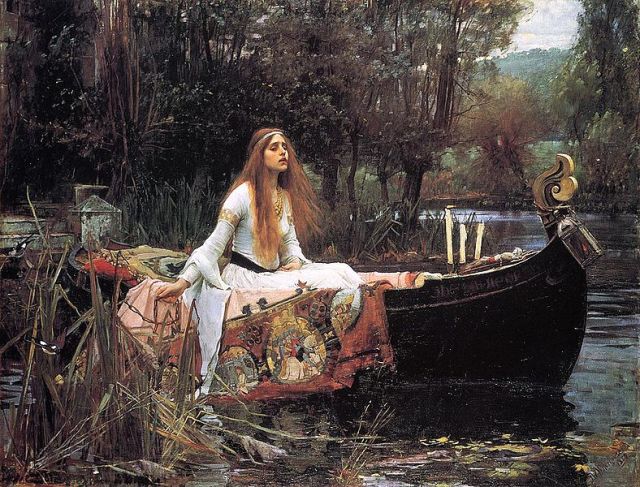 Not as great. Partly due to personal and family stuff that temporarily derailed me, but also due to this recurring problem of not being able to get through the murk in order to reach the clear waters.

I did write a nifty fun little piece for the Valentine’s Day edition of WOW555. It’s called Flashing Can SO Be Romantic and it will give you a giggle.

OK. Back in the saddle again. Or back in the boat… am I on a boat? Elaine’s on a boat…and she WILL…(spoiler alert even though I haven’t written it yet) …find clear water.

A writer by birth, a redhead by choice.
View all posts by AmyBeth Inverness →
This entry was posted in ROW80, Writing and tagged #amwriting, incorporeum, Lady of Shalott, WIP, writing. Bookmark the permalink.

2 Responses to Oh. THAT Problem…