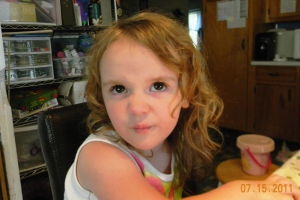 Before I even started this blog, I would occasionally pose a SyFy Question of the Day to my facebook friends. Sometimes, it was directly related to what I was writing, and I really did want some input to help me decide what direction to take with the story. Other times, it was purely fun. Here’s one of my favorites, from May 2011:

SyFy question of the day for Moms&Dads: Say it was common practice to strap a simple bracelet onto every preschooler, to monitor ALL their body chemistry, and compare the group. Data gathered would identify problems such as learning disabilities, enabling early intervention. Would you object to your child being monitored?

Shane                   If it was common practice? Depends on whether I had been conditioned to it, like if I grew up being monitored myself. From my current perspective, HELL no.

AB                          As a Mom of a kid with special needs, I often wish I had some kind of data like “When the rest of the kids had happy endorphins and adrenaline in anticipation of recess, my daughter was anxious and sad.” She is hard to read, visually. But I don’t know how to get that kind of data without being intrusive in all the other kids’ lives.

Shane                   Oops! Read it wrong. Would I OBJECT? Definitely, given the current methods of throwing a diagnosis at something and hoping you hit it. The ability to read and adjust chemical levels might be better in the future, and I might answer differently then.

AB                          I understood your “Hell no” to mean you didn’t want the monitoring! You’re right about the current state of diagnosis. I would love it if someone could constantly monitor all my daughter’s reactions and show them on a chart over the course of a day or week. We might learn something.

Derri                      mmm….. I don’t actually have a problem with monitoring. Like so many other things though, it would be ‘just the beginning’. The monitoring would likely become ‘immediate response for the child’s health’, would become ‘behavioural adjustment for the benefit of the group’, would become bloody scary really fast, not unlike carrying papers to prove your identity led so very quickly to concentration camps. With all the best intentions in the world, centralising so much information makes it way too easy for individuals to become just data, which leads to those individuals being treated as “things” by those with access to such data. …. LOL… I’m not generally as paranoid as this paragraph makes me out to be!

Patty                     I would object strongly to my child being monitored so society can create artificial “labels” and put people into groups. I DO think kids should have a smart chip implanted, though. We can find our dogs quickly but kidnappers still know it’s safe to steal a kid because they are impossible to find.

Jess                        Great article RE kid GPS tracking devices currently available: http://www.gpsfortoday.com/gps-tracking-for-kids/ Also, I have to say that I would be interested in say a weeks worth of data, or if my child were showing signs of concern maybe a few weeks worth. This info. would be useful in diagnosing correctly. I say a week or so because (obviously) constantly comparing one kid to another can bring up a whole other set of issues. My brother had an almost inactive thyroid for most of his life. He was put on Ritalin, accused of being lazy and made to feel that there was something psychologically wrong, when in fact it was a chemical imbalance. What you are suggesting would help prevent this type of mistake.

The previous SyFy Q of the Day is at http://wp.me/p1qnT4-kM Euphemisms

The next SyFy Q of the Day is at http://wp.me/p1qnT4-m1 Technobabble

A writer by birth, a redhead by choice.
View all posts by AmyBeth Inverness →
This entry was posted in SyFy Question of the Day and tagged chemical imbalance, gather data, inactive thyroid, lojack, monitor, paranoia, preschool, smart chip, special needs. Bookmark the permalink.

2 Responses to SyFy Q of the Day: Monitoring Preschoolers